The New Providence Church in McAfee was established over 247 years ago. 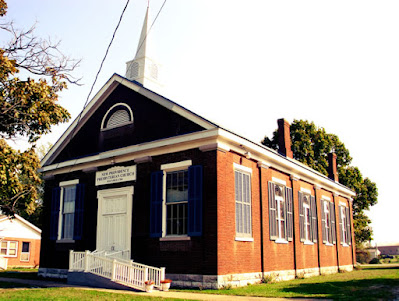 Photo from Mercer Chamber of Commerce
The McAfee party came into Kentucky in May of 1773. James, George and Robert McAfee, James McCoun, Jr. and Samuel Adams made up the group. They were from Sinking Creek in Bottetourt County in the then colony of Virginia. Reports from hunters and Indians about rich land in the Ohio Valley had encouraged these frontier people to seek new fortunes in a new land. Most in the party had received grants of 400 acres from the Governor of Virginia for their part in the French and Indian War.
The McAfee party made the first surveys ever made on the Kentucky River including surveying the bottom on which Frankfort now stands. They had traveled down the Ohio River to the Kentucky River. From the Kentucky River they crossed over to the Salt River and on July 27th, 1773, they surveyed land for James McAfee, upon which the New Providence Church would first be built. They returned to Virginia and in 1775, returned to Kentucky to clear land and plant corn.
They returned with two other men and their names were David Adams and John Higgins. They cleared two acres of ground to raise corn, but Indian trouble kept them from planting. Others worked in the fall of 1775 and in the spring of 1776. However, Indian trouble and the Revolutionary War, or "resisting the invasion of the British" as some called it, were delayed until the year 1779 their final return with their families. Like most frontier settlements, their early years were difficult. In July of 1782, another event took place that is often used in telling why the church was named "New Providence" and is told as follows:
"The inhabitants of James McAfee's station often joined in their work and aided each other in cultivating their respective farms. One day, a large party, male and female, went down to the farm of James McCoun to pull flax. A party of eight or nine Indians saw them, but being afraid to attack them, made a blind of bushes, behind which they concealed themselves, intending to way-lay the company on their return to the station and massacre the whole. Having finished their work at an early hour, they were returning when one of their company proposed to go up the creek to get some plums which grew in abundance on its banks, and thus returned home in safety."
Now in its 247th year, New Providence has had a long and valuable ministry. It is the hope of its present congregation that it will continue to be an Arm of the Kingdom of God so that in some future day this old church will still be preaching its ancient gospel to an even more modern age.
at December 23, 2021