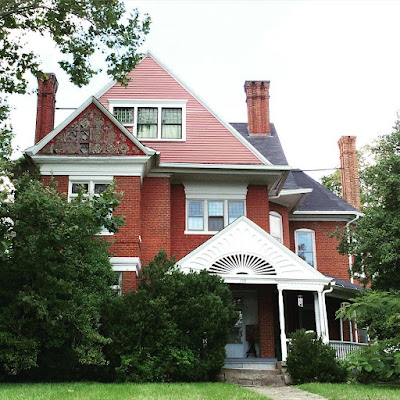 Photo from Gardens to Gables

The Dedman House was built in 1884 for Charles M. and Mollie Curry Dedman, is a Queen Anne-style house. The 2.5 story brick house has an undulating facade, with striking front gables, the smaller of which is distinguished by its pargeting detail. (Pargeting refers to the application of plasterwork to a facade of a building. Pargeting ranges from "simple geometric surface patterning to exuberant sculptural relief of figures, flowers and sea monsters, but it is only skin deep, applied onto masonry or a lathed, timber-framed wall." The technique is English in origin, and first started being employed in the 16th century.) Mrs. Dedman was very involved in the house planning - she chose the lot, the plans, and oversaw the construction of the house.