Bacon College was chartered in 1837 in Georgetown, Kentucky. Its founder was Thornton F. Johnson, a member of the Disciples of Christ who resigned from Georgetown College in order to establish an institution independent of the Baptists who administered Georgetown. Bacon College moved to Harrodsburg, Kentucky in 1839 and graduated its first students two years later. Suffering from limited financial resources throughout its existence, the college closed in 1850 having granted only twenty-four degrees while in operation. The campus was used as a high school from 1850 to 1855. It was revived through the efforts of alumnus, John B. Bowman and was rechartered in 1858 as Kentucky University. 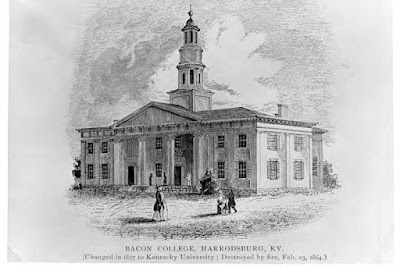