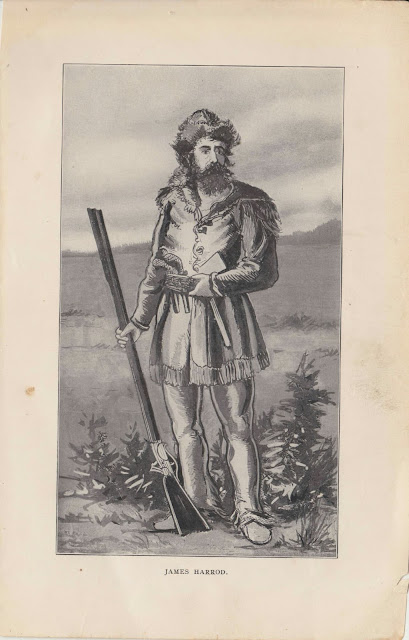 Most people are familiar with the frontiersman Daniel Boone, but most do not recognize the name James Harrod. While Boone is famous for settling land in Kentucky during the mid to late 1700s and founding Fort Boonesborough, Harrod was the founder of Harrodsburg, the oldest, permanent English settlement west of the Alleghany Mountains. Establishing Harrodsburg was a symbolic act that declared the Kentucky frontier open for settlement. These lands were no longer the exclusive hunting ground of the Native Americans, nor the unexplored wilderness of early pioneers.[1]

It is hard to talk of early pioneer life without mentioning Boone, but Harrod was the founder of Harrodsburg, the first permanent settlement west of the Alleghany Mountains, known then as Harrod’s Town. Harrod opened Kentucky for many new settlers and their families.

While Boone is famous for opening the Kentucky frontier and having numerous narratives published of his early experiences, Harrod, with little fanfare, was just as important in the early settlement process. Harrod was essential in early land surveys, the emerging court system, and leading Kentucky on to statehood.

We know that Boone was born in 1734, but historians still debate the actual birth year of Harrod. The closest guess we have is Harrod being born between 1742 and 1746, with the latter being the date used by most historians. This means there was approximately twelve years difference between Boone and Harrod.

James Harrod was born in Bedford County, Pennsylvania, but his actual year of birth is disputed. One source states James was twelve years old when his father died in 1754, but other historians states he was not quite ten years old. Kentucky historian James Klotter has recorded that Harrod was only about fourteen years old when he fought in several battles of the French and Indian War before it ended in 1763. Klotter also noted when Harrod volunteered as one of Captain Gavin Cochran's Recruits in June 1760, he listed his age at sixteen and his height at five feet, two and a half inches. This discrepancy from his adult height of over six feet may show he lied on his recruitment records.[2] 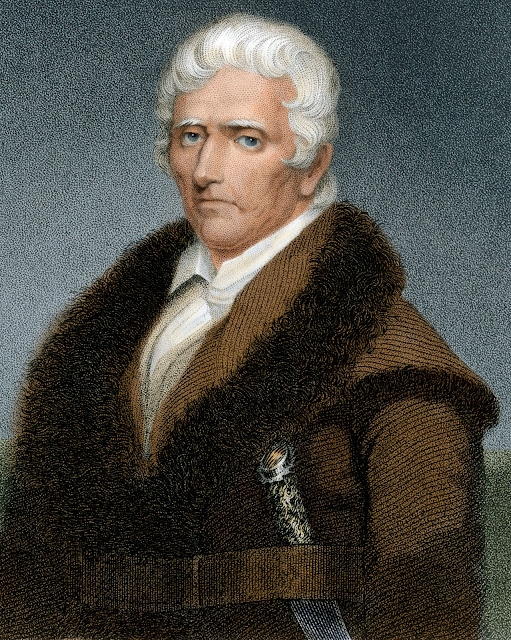 Daniel Boone was known for extensive hunting excursions during the 1760s and 1770s. At one time he went for nearly two years without seeing any civilized person except for his brother. During the winter of 1769-1770 he spent time in a small cave in Kentucky, about three miles from where the Harrod’s Town settlement would be.[3]

Beginning in the late 1760s, James Harrod made short hunting or surveying excursions into Kentucky. It was on a surveying expedition in 1773 that Harrod first discovered the “Great Meadow”, the Native American’s name for the Bluegrass region. Harrod returned to Kentucky in 1774 and established Harrod’s Town. This first stay was brief, thanks in part to the Battle of Point Pleasant and numerous Native American attacks. Harrod finally returned to Kentucky to stay in 1775.

The new American nation emerged at the same time as Kentucky. The country wanted a hero who represented the “common man,” and Boone became that symbol, standing for all those people who had risked their lives to come and settle in Kentucky. In that way, his fame extended to all of them.

John Filson told Boone’s story in the first book written about Kentucky – The Discovery, Settlement, and Present State of Kentucke (1784). It made Boone famous all over the world, while leaders such as Harrod, Simon Kenton and Benjamin Logan received little attention. Later, people would use Filson’s book to write their own accounts of Boone’s life, and much later, motion pictures and a television series added to his fame.

According to Filson, Boone was born into a Quaker family in Pennsylvania. Although the Quakers believed that people should live in peace, Boone would end up playing a big part in a very violent time in history. He never went to school, but his son said that Boone could “read, spell, and write a little.” He was well versed in the lessons of the woods.

When Boone was twenty-one, he married seventeen-year-old Rebecca Bryan. No pictures of her exist, but people described her as tall and buxom, with jet-black hair and dark eyes. She had four children by the age of twenty and ten children overall. Later, she also raised six other children whose mother had died.

When Boone left on his long hunting trips, Rebecca tended the crops and kept the family going; she probably never learned to read or write. Her efforts allowed Boone to travel to Kentucky to hunt and procure furs. He wore his long hair in Indian-style braids and dressed much like the Native Americans did. Once in the 1760s he spent months alone in Kentucky, perhaps the only European in the whole area. When a friend asked him if he had ever gotten lost, Boone answered that he had not but admitted that he had once been “pretty confused” for several days. Another time, some so-called Long Hunters in search of furs heard a strange sound and, when they investigated, found Boone lying on his back in the middle of a field, singing loudly. Boone loved nature and the openness of Kentucky.[4] 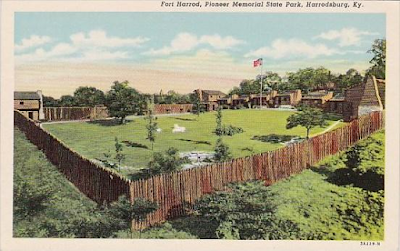 By 1754, James, already a skilled woodsman, was particularly adept at hunting, trapping, and fishing. His skill with a rifle was particularly noteworthy. James began his long military career by serving as a ranger and guard, and then as a commissioned officer. James was an excellent marksman. Harrod had a love for hunting and wild-woods life and a reputation as a great backwoodsman and frontiersman. [5]

Boone and Harrod both started forts in Kentucky in 1774 and 1775. Both originally chose building sites that were inadequate, and they had to choose different sites for their forts. Harrod’s original fort in 1774 was built within yards of the Big Spring and when his company returned in 1775 after Dunmore’s War, the cabins and land had been flooded. Harrod chose a new site up on what would become known as Old Fort Hill.

Harrod’s first fort in 1774 was only three log cabins built below the Big Spring and enclosed with large “hoop poles” or sapling trees. They were sharpened at the top and the base was firmly set in a trench which was opened around the cabins. The poles were then securely fastened together with hickory bark, woven in and out between the poles making a stockade seven to eight feet high. This frail protection afforded the men some little security against prowling bears and Native Americans. When Harrod’s company returned in 1775, they built three more cabins about 285 feet from the Big Spring (East Street). They lived here while the fort was built on the high hill above Town Creek.[6] 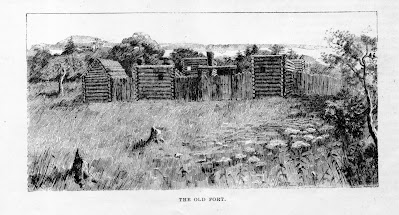 Boone and his men reached the banks of the Kentucky on the first of April 1775 and lost no time in clearing the land in anticipation of erecting a fort; it would be only twenty-two miles from Harrod’s Town, as the crow flies. Boone built his cabin on the west bank of a little stream that flows into the Kentucky about one-half mile below Otter Creek. However, Boone’s partner, Richard Henderson, found it impracticable to build cabins for his men at the same place and after reflection they decided to build a fort on the east, some three hundred yards away. By the twenty-second of April, the fort was under way and lots had been laid off for the men.[7]

Boone decided to build the town in the narrow valley that lay along the banks of the Kentucky River. On the north side ran the narrow current of the stream, on whose northern banks were high cliff palisades. Settlers soon realized from these summits a rifleman could control any point in the valley across the river. Both banks of the river were thickly screened by the trees and these were never cut even though they provided an easy approach to the fort. On the south side, lofty hills ascended close the fort and commanded a security risk for the fort. On all sides the fort lay exposed to any enemy of determination and skill.[8] 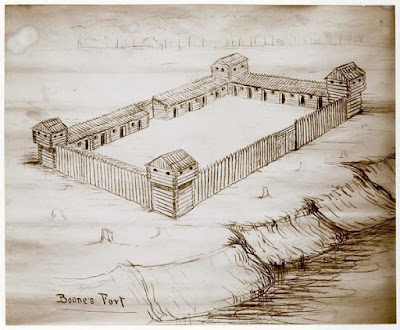 Although Boone is the more well-known historical figure compared to Harrod, he never had a town named after him; only the Fort Boonesborough settlement area. Harrod had a town named for him in addition to the fort and station settlement: Fort Harrod, Harrod’s Town, and Harrod Station.

Both Boone and Harrod spent time among the Indians, but there was a big difference. Boone was held prisoner by the Indians several different times and although he grew to know his captors and become accepted as a friend, he was still a captive. Harrod, on the other hand showed kindness and was helpful to the Indians. He freely spent time with them, learning their customs and becoming their friend.

Boone was wounded sometime after 1776 defending Boonesborough. Harrod never had a serious wound from a Native American attack, but he suffered two broken legs, attributed to the fact he liked to hunt on horseback. 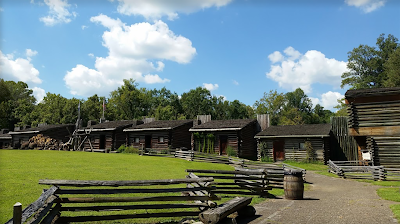 One of the saddest comparisons between James Harrod and Daniel Boone is their children. While Boone had many children, Harrod only had one daughter and a stepson whom he would come to love as his own. Daniel Boone lost a son, Jamie Boone, to a Native American attack; the boy was in his late teens. James Harrod lost a stepson, James McDaniel, Jr., to an Indian attack; the by was only twelve years old.

In 1792, Harrod mysteriously disappeared while on a hunting trip. He was declared dead after a year and his will probated in favor of his widow and daughter. Although there are several different theories on the reason Harrod never returned, but we will never know with one hundred percent certainty. The most common theory is Harrod was killed by his hunting mate, a man named Bridges, who was facing a lawsuit with Harrod as his opponent.

Not long after Harrod’s disappear, Boone left Kentucky for the frontier of Missouri. He continued to be an American frontiersman for almost thirty years after Harrod’s disappearance. He was a legend in his own lifetime. After his death, Boone was frequently the subject of heroic folklore and works of fiction. His adventures, both real and legendary, were influential in creating the archetypal frontier hero of American mythology. In popular culture, he is remembered as one of the foremost early frontiersmen.

Comparing the available historical data on both James Harrod and Daniel Boone, it is easy to see all their accomplishments. The problem is there is so much more written about Boone and little emphasis on Harrod.