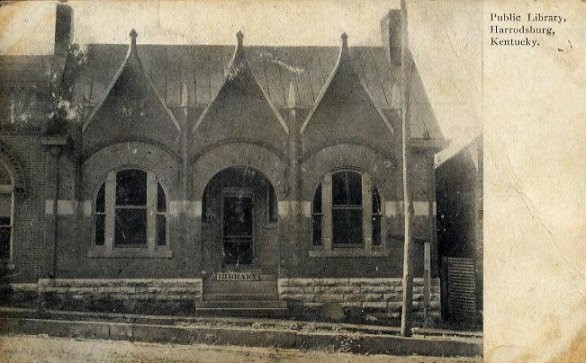 This postcard photograph is from the early 1900s and depicts the Victorian Romanesque building on West Poplar Street. This was the Harrodsburg Library from 1911-1965. In fall 1965, the library was moved to the restored section of Morgan Row. This was the third location for the library - the first was in the old courthouse starting 1823 and then in 1895 it was one room in the James Flats building. The above building was purchased in 1911.

Social Libraries in Kentucky were started about 1797. The Harrodsburg Library Company was incorporated in 1823. The charter implied that it had a room at the time of incorporation. It issued a catalog in 1824 when it had about two hundred volumes