Photo from the Courier-Journal

The Kentucky Brooklyn Bridge collapse on November 20, 1953 - highway 68 at the Kentucky River.

Started in January 1870, the Brooklyn Bridge was completed in October 1871. The dedication ceremony was held on October 10, 1871, when a large crowd gathered on a brisk morning among the autumn leaves along the bank of the river to witness the event. As part of the celebrations, Capt. Thomas Cogar drove the first stagecoach across the bridge and declared it officially open. The opening of the bride brought the closure of Cogar's Ferry, which had operated from a landing near Brooklyn since 1845. 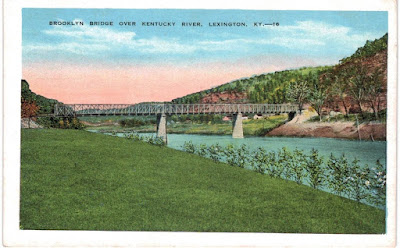 The Brooklyn Bridge was a 250-foot-long iron through truss bridge that carried the Lexington, Harrodsburg and Perrysville Turnpike across the Kentucky River. Before the construction of the Boone Tunnel immediately north of the bridge, travelers would have to pass along a dangerous projection over the cliff edge, and then the road would double back to the bridge. 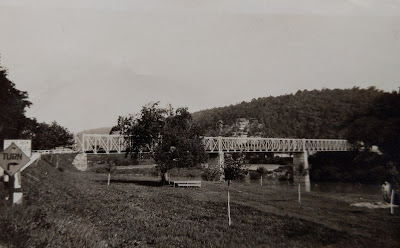 In 1926-27, the Highway Department improved what is today known as U.S. Highway 68. As part of the improvements, the treacherous stretch of road that once led to the Brooklyn Bridge was bypassed, and a tunnel was created through the cliff immediately to the north of the bridge, allowing direct passage onto the bridge. Area historian Clyde Bunch recalls crossing the Brooklyn Bridge many times as a young child on fishing trips to Herrington Lake. The plank flooring of the bridge rumbled underneath the wheels of the family car. In those days, many boats still ran on the river, and he would always look for them while crossing. 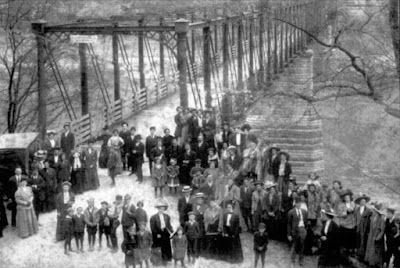 Photo was taken on October 10, 1871; courtesy of Clyde Bunch

The above photo was taken for the dedication of the Brooklyn Bridge on October 10, 1871. 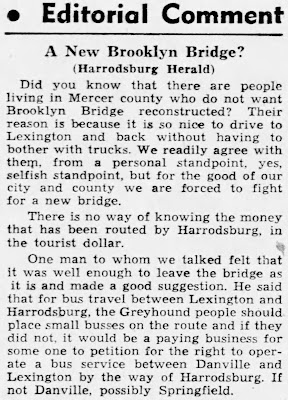 Lexington Herald, September 1, 1953
Interesting Editorial Comment about citizens who did not wish the Brooklyn Bridge to be reconstructed - almost three months before the bridge collapse. 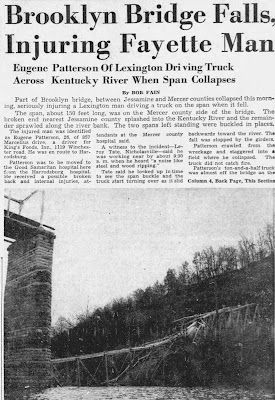 Lexington Leader, November 30, 1953
A temporary repair was made to the bridge, while a permanent bridge replacement was discussed.

Messenger-Inquirer, December 2, 1953
A contract was awarded for the replacement of the Brooklyn Bridge. 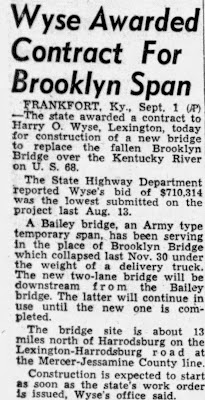 Lexington Leader, September 2, 1954
Below is a 1.5" bolt that was sheared off the Brooklyn Bridge during the collapse. It was collected on December 1, 1953 by Guy F. Vansant, Director of the Division of Design. Note the penny used for size details. 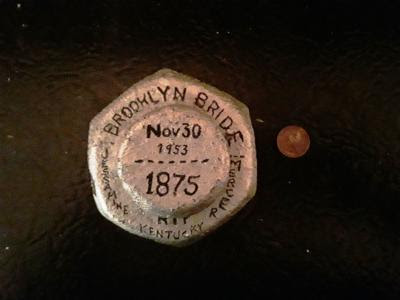 Photo was taken by Walter Laughlin in December 2019
Eugene Patterson, the man injured in the Brooklyn Bridge collapse, sues the state of Kentucky for $15,000. 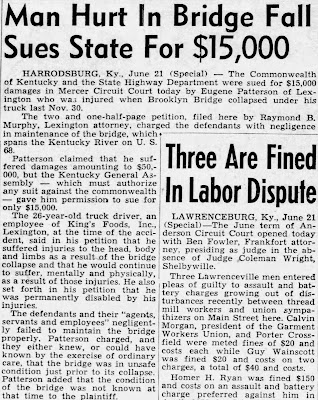 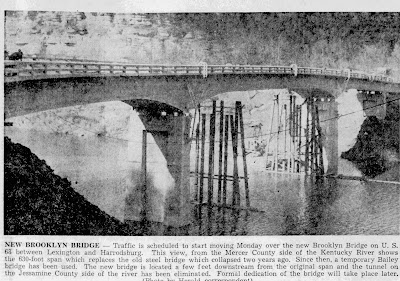 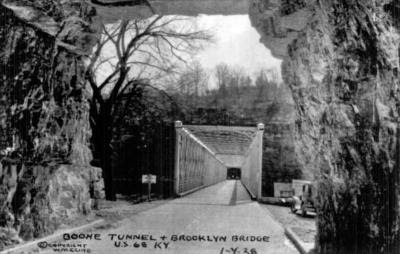