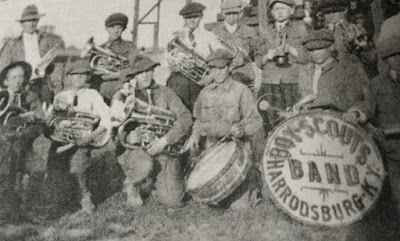 Musical training started young, as shown in this Boy Scout Band of 12 boys posting with their leader at the Mercer County Fairgrounds in the early 1900s.  In addition to performing locally for bandstand concerts, there was a newspaper accounts in 1915 of their appearance at a large political rally in Nicholasville.