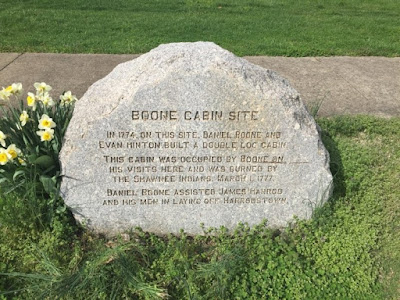 The more research I do on Harrodsburg, the more problems I have with this monument to the Boone Cabin Site.

According to a snippet of an article in the Frankfort newspaper, Yeoman, on May 9, 1843:

"In the meantime, [Daniel] Boone, having retired with his family on Clinch River in Virginia, was commissioned as a Captain; and about the first of June, 1774, he was sent by Governor Dunmore to the falls of Ohio, to warn some companies of surveyors of the hostility of the Indians, and Boone in his route came upon Harrod and his company at Harrodsburg, and aided in laying out the town; and in company with a man by the name of Hinton, built a double cabin, which went by their names until burnt by the Indians. Thus, Boone had the honor of laying the foundation of Harrodsburg, nearly a year before he moved his family to Kentucky."[1]

The author of this article was General Robert B. McAfee. However, prior to this article, there was never a mention of a Boone cabin in Harrodsburg. In 1845, Lewis Collins published History of Kentucky, and of Boone's trip in 1774, he wrote, "Of the incidents attending this expedition, we have no account whatsoever."

However, farther along in the book, this paragraph appears:

"About the middle of June 1774, Captain Harrod and his company agreed to lay off a town, including their camp . . . and proceeded to erect a number of cabins on their respective lots of one-half acre, and five-acre out-lots. The town thus laid off received the name of Harrodstown; subsequently, it was called Old Town - and finally, its present name of Harrodsburg... Here Colonel Boone found them on his way to the falls of Ohio, being sent out by Governor Dunmore to warn the surveyors in that region that the northern Indians had become hostile... Harrod and his company remained at his town until about the 20th of July."

In 1874, when Richard Collins published his two-volume History of Kentucky, only minor changes were made to this text. Thereafter, most authors that covered this subject included Boone's trip to Harrodsburg in 1774, and the double cabin he built together with Evan Hinton.

The problem is, Daniel Boone was not in Harrodsburg long enough to build a cabin, much less spend any time there. He and Michael Stoner were sent to Kentucky under orders of Colonel William Preston, the official surveyor of Fincastle County, to warn the settlers of impending Indian violence and to muster a militia.

Although there is no account of Daniel Boone's day by day locations during his 1774 trip, some records survive which allow us to reconstruct his route. Boone and Stoner crossed the mountains in the vicinity of Pound Gap and started down the North Fork of the Kentucky River. By the time they reached present-day Madison County, they were on the south side of the river - Stoner mentioned they crossed Station Camp Creek and passed Mulberry Lick. It is also certain they were on the opposite side of the river, around the headwaters of Hickman Creek. The elapsed time between Boone's date of departure on June 24, 1774 and the major Indian attack that emptied Harrodsburg on July 8, was eleven days. Although one may speculate as to how fast Boone and Stoner traveled on their way to Kentucky, John Filson, historian, originally reported that they required 62 days to travel 800 miles round trip. At this rate, their average speed would have been 12.9 miles per day, which would mean that they could not have reached Harrodsburg until the July 19, over a week after it was abandoned. By way of the North Fork of the Kentucky River, it is approximately 300 miles from Castlewood, Virginia, where they started, to Harrodsburg.[2]

Another reason why I don’t think Boone spent time in Harrodsburg is because we must assume that he was instructed by Colonel Preston to search for the surveyors in certain designated locations where the surveyors had agreed to work prior to their departure. Since the Fincastle surveyors spent most of their time laying out plats at the Falls of Louisville and in the Bluegrass Region near the present-day Lexington, would not Boone and Stoner have been told to search these areas? If this were the case, it is hardly likely that the scouts would have headed directly for Harrodsburg. There is one fact that cannot be disputed - Boone was ordered to bring the surveyors home, not merely warn them of their danger. Colonel Preston was well aware the Shawnees were hostile. Although Boone had volunteered to go to Kentucky, he was still a member of the Virginia Militia, so he would have been expected to comply with his instructions. Those who suggest that Boone lingered about Harrodsburg, surveying, and building a cabin, rather than spending his time searching for the surveyors, are actually saying that Kentucky's most famous pioneer disobeyed his orders for the hope of private gain.[3]

Assuming Boone visited Harrodsburg sometime in the early part of July, the question should be asked, did he have sufficient time to construct a cabin? The answer, of course, depends upon the time available and the size of the cabin. To build a cabin measuring 16 by 22 feet required about 40 logs cut, trimmed, and notched, each of which took over four hours of labor by a good axe man. Afterward, approximately 40 hours are needed to put the logs in place, and an additional 10 hours to construct the roof. Over 26 working days are needed to build one cabin, under the best of conditions.[4]

As for Evan Hinton, not much is known about him. He was one of James Harrod’s original settlers in 1774, but he was a friend of Squire Boone, not Daniel. Squire moved to Harrodsburg in 1776 with his family and built a cabin where they lived until driven into Fort Harrod by Indians a year later. He also lived at Fort Harrod during the attacks of 1779. When Squire Boone established his station, Painted Stone, in Shelby County, Evan Hinton was along. Hinton was killed a few years later while attempting to haul a load of buffalo meat to General Clark's troops in Louisville. After his death, Squire Boone helped the widow Hinton and her three children until she remarried the following year.

There is a deposition by David Williams, one of the members of Harrod's original company, which suggests that the notorious Boone-Hinton cabin in Harrodsburg was constructed in 1776. It reads as follows:

“This Deponent being of lawfull age deposeth and saith that he was at this place in the year 1774, 1775, and 1776 and that he always knew it to be called Harrodsburg or Harrod's Town from that time to the present day. Question by the Complainant: Which was the principal part of the town at that time? Answer: In the year 1774 and 1775 near the pile of stones shown to Thomas Allin this day, the pile of stones is where stood the chimney of Hinton or Boone Cabbin in the winter ensuing or spring of the year 1776 the principal residence of the people was at the Old Fort where Mrs. McGinty now lives.”[5]

If Daniel Boone had visited Harrodsburg in 1774, it is strange his presence was never mentioned in the accounts of those who were present at the new town, or by Colonel Preston who talked with some of the company immediately after their return to Virginia. Documents by Abraham Chaplin, James Sodowski, and William Preston all agree in certain particulars. They mention after the attack at Fountainbleau, all of those at Harrodsburg returned to Virginia. Boone was not with them. If the men in Harrod's company had any information on the whereabouts of Boone and Stoner, one might assume that such news would have been included in Preston's letter to the governor, but it was not. Both Chaplin's and Sodowski's accounts were written after Daniel Boone had become famous, so if he had visited Harrodsburg the fact certainly would have been noted, but it was not. Finally, it is especially important that in subsequent years neither Boone nor Stoner ever mentioned being in the new town.[6]