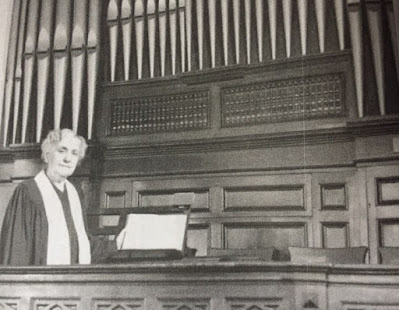 This photograph shows Sophia Hardin Grimes with the second pipe organ installed in a Harrodsburg church (ca. 1901), at the First Presbyterian Church on South Main Street and later renamed Harrodsburg United Presbyterian Church.  “Miss Sophia,” as she was called, was born and educated in Harrodsburg at Daughter’s College and she was the daughter of Ben Lee and Sue Cardwell Hardin. She was married to John Haldon Grimes in Harrodsburg on December 24, 1895. An accomplished musician, she died on October 28, 1965, at the age of 91.

She was the church pianist and then organ player, from 1890 to 1960.  In a newspaper interview shortly before her death, she is quoted as saying,

“I know that my musical ability is a gift from God and I have been happier giving it back to Him by playing for individuals, civic clubs and most of all for my church, than if I had gone on the concert stage and used it only to make money.”

In her 70 years of playing, she missed fewer than a dozen Sundays of the 3,640 that she played.  Upon her retirement in 1960, stories of her unique record of service appeared in both the Presbyterian Survey and Presbyterian Life, official magazines of the area Presbytery. She also played the piano for the local Rotary Club for 34 years and taught music to succeeding generations of students for 50 years. Never selfish with her time and talents, she provided music on countless occasions for community affairs.

Mrs. Grimes was the mother of two daughters, Carolyn and Haldon, who have contributed to the community.  Carolyn succeeded her father and served for 25 years as Postmaster of Harrodsburg, as well as becoming an Elder and serving as President of the Women of the Presbyterian Church, President of the Harrodsburg Historical Society, and a leader in innumerable community-related projects. Haldon married Marine Col. George M. Chinn and saw her husband, after his retirement from active service, become Director of the Kentucky Historical Society, Director of the Kentucky Military Museum, and become an acknowledged author.