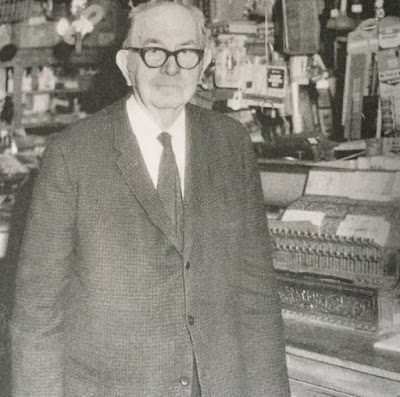 Mr. Benjamin Franklin Norfleet is shown standing inside the Norfleet Hardware & Implement Company on East Office Street in 1968.  This was one of the most unique hardware stores in central Kentucky.  He carried items dating back to when he started the business in 1934, in addition to also stocking modern items.  A trip to his store was like stepping back into another time.  There was a saying among his customers, “if you can’t find it at Norfleet’s, then it’s not available anywhere.”

Advertisements from the 1940s list these items available:  a velocipede (an early type of bicycle), scooters, sleds, scout knives, boy’s wagons, ice cream freezers, pressure cookers, vases, Libby-Owens glassware sets, electric heaters, harnesses, lawnmowers, chinaware, scythes, wire fencing, and poultry supplies.  Norfleet continued to manage the business from his home after he retired, by receiving nightly reports on the day’s activities from his daughter.  In an interview in 1975, he said he was "continually amazed at the inflationary prices he had to cope with."