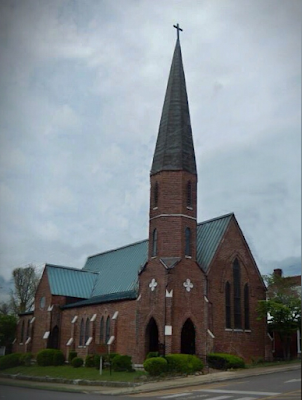 St. Philips Episcopal Church is the only church in Harrodsburg's central business district that stands as it was originally built.  The Gothic architectural design was the result of Bishop Smith’s desire to create something “worthy of town.”  Harrodsburg was known at the time as “the Saratoga of the South” because of the throngs of wealthy Southerners, many of whom was Episcopalians, who came here for the benefits of the medicinal spring water.  It has been called “the most perfect specimen of pure Gothic, exterior and Interior, of its size in Kentucky.”

St. Philips was dedicated in 1861 by its designer Bishop Benjamin Smith.  The church sits on land rich in history, from Indian fights to the horrors of the Civil War.  The land was the site of skirmishes in the late 18th century between the pioneers, including James Harrod's militia and the Indians.  After the Battle of Perryville in 1862, the church was the site of General Leonidas Polk’s impassioned prayer for blessings on friend and foe alike.