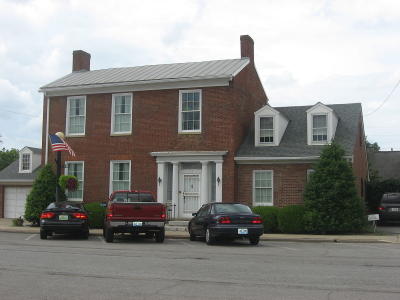 The Benjamin Passmore House and Hotel was built by Passmore and has been a landmark on Broadway Street since it was built circa 1843.  It has passed through many hands and has served - during its 168 years - as a hotel, stage coach stop, boarding house, grocery, and now the offices of the Harrodsburg Herald newspaper.  When it was the Mercer House, there was an advertisement that read, “---the bar is furnished with pure liquors and the best will be sold by the barrel if desired.” Photo from my personal collection
The James Harrod Trust Historical Marker on the building reads:
"The hotel was built circa 1843 and the house built circa 1853 by Benjamin Passmore,
Harrodsburg blacksmith and entrepreneur.
The house is a hall and parlor plan.
During the era of stage coach travel, the hotel provided popular accommodations.
It also served as a residential hotel for young married." 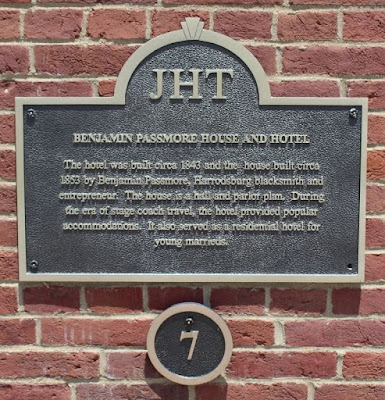 Photo from my personal collection