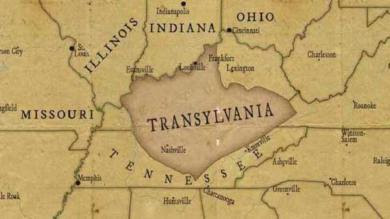 Photo from the Robinson Library

Later in March 1775, the Transylvania Company, led by Richard Henderson, helped negotiated the Treaty of Sycamore Shoals with the Cherokee Native Americans.  Henderson was an important man in the east – a colonel in the militia, a noted orator, a judge – a self-made man who had dreams of a great fortune in the West. He had a vision of taking over Kentucky and making it a separate country with himself as supreme ruler, or at least a new colony with himself as governor.

The treaty was not really a treaty, but a deed. The company received some two hundred thousand acres of land lying roughly in the area bounded by the Kentucky, Cumberland, and Ohio Rivers. Henderson paid $10,000 in guns and other provisions for the land. However, the Cherokee did not mention they didn’t own the land.

Daniel Boone helped set up Henderson’s negotiations, perhaps for money or a promise of glory in the new regime. As he left the treaty site, the Cherokee Chief Dragging Canoe, shook Boone’s hand, but said: “We have given you a fine land brother, but you will find it under a cloud and a dark and bloody ground.” Boone left Sycamore Shoals with thirty men and orders from Henderson to establish the capitol of his Transylvania Empire and to build a road through the Cumberland Gap.

Boone and Henderson reached the banks of the Kentucky on the first of April 1775, and lost no time in clearing the land in anticipation of erecting a fort. Boonesborough would be only twenty-two miles from Harrodstown, as the crow flies. By April 22nd the fort was under way and lots had been laid off for the men.

Henderson had to move fast in establishing his settlements before the Native Americans could drive him out. He recorded in his journal he was afraid his experiment would be wrecked at the onset. He also worried about James Harrod. Henderson could not risk an open argument with Harrod; he must and would win his support. 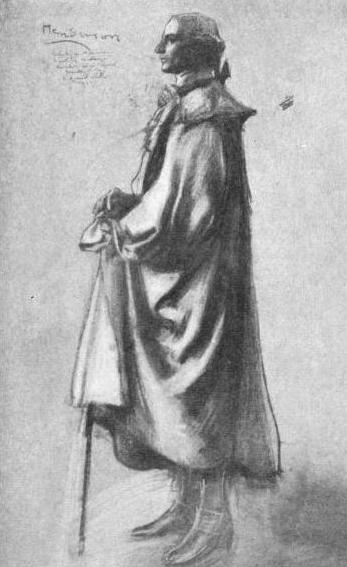 In addition to problems with Henderson, James Harrod had another challenger. Colonel Thomas Slaughter brought a party of land seekers from North Carolina to Harrod’s Town. Upon their arrival, Harrod greeted them warmly and sent the newcomers out to begin their search for unclaimed land. When they realized Harrod’s men had already marked vast acreages, they began to grumble and accuse James of unfair tactics. Slaughter complained Harrod’s men had no right to mark every piece of land and secure all the good springs in the area.

Harrod replied his men had arrived first and had started a town. The men marking land were working for those who had returned to the settlement in order to bring out more supplies or their families. Everyone wanted good land and Kentucky was a new country with plenty of land for the all. Harrod chose his land about six miles from the settlement proper, in what is now Danville. He named his station Boiling Springs.

On May 7th Harrod and Slaughter came to Boonesborough to ask Henderson to settle their dispute. While Harrod and Slaughter argued, Colonel Henderson saw himself as an uneasy mediator. Henderson secretly favored Slaughter, but fearing Harrod’s wrath, refrained from voicing this conviction and tried to appear impartial. Henderson proposed that the different settlements in Kentucky should send delegates to Boonesborough on May 23, 1775, and form a representative government to make laws and rules to prevent trouble. The four distinct settlements – Boonesborough, Harrod’s Town, Boiling Spring Station, and Logan’s Station (formerly St. Asaph) – agreed to meet at Boonesborough to draw up a constitution and make laws. 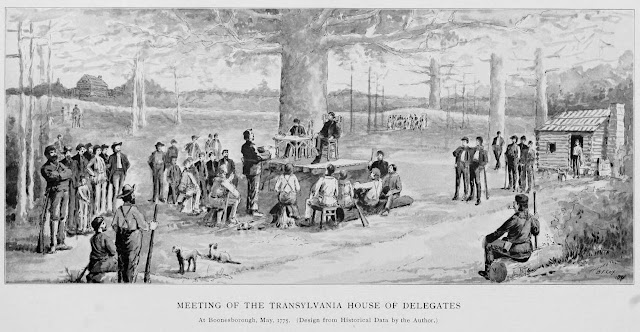 When the Transylvania Assembly held their meeting, it was the first American legislative assembly west of the Appalachians. They had nowhere to house the delegates, so they found the shade of a “giant divine elm” between Boone’s stockade and the unfinished Boonesborough fort as a suitable meeting place. This majestic tree stood on a beautiful plain, covered and perfumed by a turf of fine white clover which made a thick carpet of green up to the trunk. It is said that between the hours of ten and two, the shade of the elm would comfortably cover a hundred people.

As the host settlement, Boonesborough was allowed six delegates; Harrod’s Town, Boiling Springs, and Logan’s Station were allowed four delegates each. The eighteen elected delegates would make up the lower house of a legislature, but the land owners would constitute the upper house. Henderson would provide executive leadership, and the Assembly would collect  land taxes of two shillings per hundred acres.

Henderson proceeded to discuss the problem facing the new assembly. Referring to English law instead of Virginia or North Carolina law, Henderson skirted the touchy subject of prior land claims. A three-man committee, including Harrod, was formed and drew up a statement to acknowledge an earnest desire to meet their legislative tasks. The first order of business was to draft a constitution for the new colony. Henderson wanted the constitution to have an elected assembly, with perpetual rents, and a power of veto reserved for the landowners.

The convention remained in session until the twenty-seventh, and during that time passed nine laws. These laws concerned themselves with a variety of topics: establishing courts, regulating the militia, punishing criminals, preventing profanity and Sabbath breaking, writs of attachment, clerk’s and sheriff’s fees, preserving the range, improving the breed of horses, and, finally, preserving the game. This last law was made necessary by the fact that the abundant game of the region was already fast disappearing because of reckless hunting by settlers.

The delegates agreed it was highly necessary to provide for courts, a militia, the collection of debts, and the punishment of criminals. Harrod served on a number of committees, including the one on lands in which he was chairman. He drew up regulations for the militia, helped amend the bill prohibiting profane swearing and Sabbath breaking, and also served on a committee with Daniel Boone for conserving game.

One of James Harrod’s major triumphs was the law providing for freedom of worship. This passed in spite of the fact that at the time, the Church of England was a state institution in Virginia. The religious provision must be accredited to the temper of the frontier delegates themselves, many of whom, like Harrod, were dissenters, Scotch-Irish Presbyterians, or indifferent churchgoers.

The assembly agreed to meet again in September 1775 and the delegates adjourned. The settlers returned to their surveying, clearing, and planting.