Photo from the Indiana Historical Bureau

Year of the Bloody Sevens

Along the American Revolutionary War’s western front, Kentuckians called 1777 the bloody “Year of the Three Sevens.” Cabins were torched, leaving bloated, mutilated corpses of men, women, and children. The nerves of the walking wounded were frayed and ragged as they surveyed the burned crops and the slaughtered cattle, hogs, and goats. Lack of food and ammunition led to starvation and overwhelming death.

The year 1777 opened with two months of calmness. The Native Americans committed no raids and seemed to have abandoned their wrath against Kentucky. The pioneers began to recover their spirits and venture away from the support and protection of the stockades. Unbeknownst to them, the British Governor of Canada was directing his Native American allies toward Kentucky with instructions to destroy the settlements there.

At first the Native Americans roamed around in small war parties causing mischief and mayhem. They would set fire to a cabin in Harrod’s Town, disappear into the woods, only to reappear and scalp a hunter. They would snatch infants from mothers at the gates of forts and other times they would just lie in wait. The white men were also coldblooded, collecting scalps and feeding Indian bodies to their dogs thinking it would make them ferocious.

March 5, 1777, the militia of Kentucky County started a regiment, with a company mustered from each settlement - Boonesborough, Harrodsburg, and Logan’s Station - and elections for officers were held at Fort Harrod and James Harrod was made a captain. Prior to this, every fort and every camp had its own selected chief, with but little order or subordination.

Most of the pioneers knew there were troublous times in store for Kentucky if the Native Americans should again take the warpath. At this time when the Kentucky settlements were in greatest need, they were also at their weakest stage. Indian attacks and the rumors of war had pretty well emptied the country. Three hundred people had left Kentucky and seven stations had been abandoned. Boonesborough, Harrodstown, and Logan’s Station alone survived, and the latter was temporarily abandoned in the early days of 1777. Many of the people from the abandoned forts had found refuge at Harrod’s Town. There were in essence only two settlements and a possible one hundred and fifty men in Kentucky. Although Harrod’s Town was made the capital of the new county, all Kentuckians had to work together in order to survive.

The first attack on March 6, 1777 at Fort Harrod was a Shawnee war party led by war Chief Blackfish. They ambushed three men at their maple sugar camp near the fort. One man was wounded and captured, but James Ray, who possessed what were possibly the longest legs on the western continent, made his escape and ran away while the Native Americans stood dumfounded at his speed. The last man hid in a hollow log and struggled to keep quiet as the Shawnees tortured and eventually killed the first man. When James Ray reached the fort, he gave the alarm and thirty men set out for the sugar camp.  While Blackfish failed to take the fort, he did cause the delay of spring preparations for corn planting, so no corn was planted at Harrodsburg during 1777.

The Native Americans killed all the cattle they could find and continued to molest the fort throughout the year.  On March 8, several men ventured out from Harrod’s Town to bring in corn from the corn cribs raised the previous year; it took them ten days.

On March 28, 1777, a large number of Native Americans again attacked Harrod’s Town. They divided into small parties and waylaid every path and avenue to the fort from the fields or forest, concealing themselves behind trees and bushes. They also attempted to cut off all supplies arriving at the fort.

By May 1, 1777, there were only eighty-four men fit for militia duty at Harrod’s Town, twenty-two at Boonesborough and fifteen at Logan’s Station. This made one hundred and twenty-two men fit for duty in Kentucky. Most of the cattle had been killed and most of the horses stolen. No corn was planted at Harrodsburg.

Hardly a week went by without one or two deaths because of ordinary activities near the fort.  On June 22, 1777 one man carelessly wandered outside the fort above the Big Spring, against Harrod’s orders. He was killed and scalped by the Native Americans. They cut off his head and stuck it on a pole. For years after that, the boys living near the fort used to say that at night when the moon was full, they could see a ghost around the fort springs. 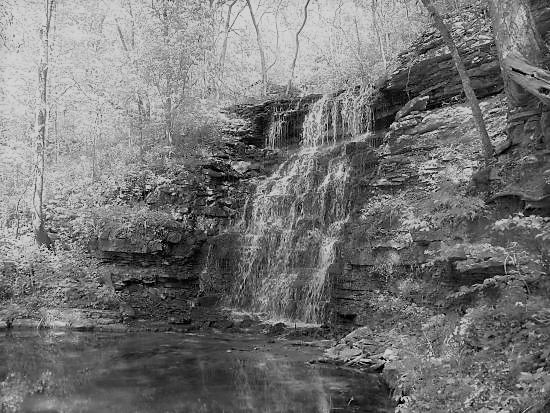 September 11, a party men to a settlement at the Cove Spring, five miles southeast of Harrodsburg to shell corn and bring back to the fort. The “corn crib skirmish” occurred on September 22 when a party of Native Americans came through a canebrake and fired upon the whites as they were shelling corn. This spirited little affair was known among the frontiersmen of the day as the Battle of Cove Spring.

Harrod never suffered any injuries during the numerous Indian attacks, but he did end up with two broken bones related to hunting trips, both incidents happening in the same way. Harrod liked to do his hunting on horseback because he needed the extra speed for chasing down buffalo, deer and elk, but managing a long rifle while mounted was risky. Both of Harrod’s accidents happened when he fired and his horse reared up, threw him off, and broke his thigh bones.

James Harrod tried to keep things running cheerfully and smoothly, but it was no fun to be cooped up in the fort all summer. Nerves were frayed and the women were quarreling and gossiping. The women were never safe outside the fort during the summer of 1777, but they could only stand the dirty, smelly clothes just so long before venturing into danger to clean them.

On September 2, 1777 the first court was held at Harrod’s Town. Harrod became a justice in Kentucky County.

Not only were the Indian attacks the most frequent and violent during this year, but the winter of 1777-1778 was the worst ever endured by the pioneers. The temperatures dropped to twenty degrees below zero. The rivers and springs froze solid and travel was impossible. The bears, the buffalo and smaller wildlife were found starved and frozen to death. There was no food or water and Indian attacks were almost daily. Many pioneer men, women and children died of starvation and dehydration. The pioneers were able to survive but they lost all of their livestock and many friends.

The Fort held. Fort Harrod was the only Kentucky fort never breached.