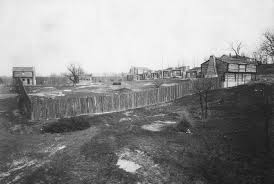 The log houses of Fort Harrod consisted of one room with a dirt floor and were approximately twenty feet by twenty feet.  Some cabins had a loft that could be reached by a ladder for sleeping.  The first-floor room usually had a rope bed, crude table and chairs for eating, and a fireplace for heat, light and cooking with cooking utensils hanging from it.  The fort’s cabins, three blockhouses, and schoolhouse were of foot-thick logs that were squared on the top and bottom to fit snugly when chinked with clay and straw. 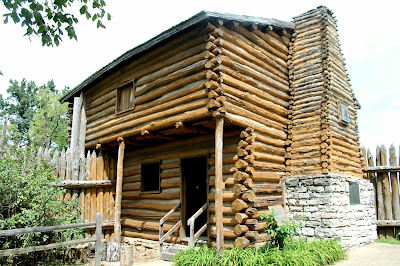 James Harrod Blockhouse from Personal photo
The blockhouses measured about twenty-five feet by forty-four feet. Only three of the planned four blockhouses were ever built at Fort Harrod. The northwest blockhouse was never built because of a large freshwater spring located in that corner of the Fort. The southwest blockhouse was the home of James Harrod. The southeast blockhouse was the Kentucky home and office of famed pioneer and explorer, George Rogers Clark. The northeast blockhouse was home to a true pioneer lady, Anne McGinty.
The blockhouses were the main defense system of the Fort. Each contained two levels with five or more-gun ports on each wall, from which the pioneers fired their rifles. They overhung the fort wall by about two feet on both sides and, in the overhang, they placed a trap door. From the blockhouses the defenders could shoot attackers off the stockades if they got too close or tried to climb the walls. Also, the trap doors were used to pour water down to put out fires set by the Native Americans, or to drop boiling water or animal fat down upon attacking Native Americans who had gotten too close to the wall to shoot from the stockades or blockhouse gun ports. Long poles were used to push the hostiles back off the walls and roofs. 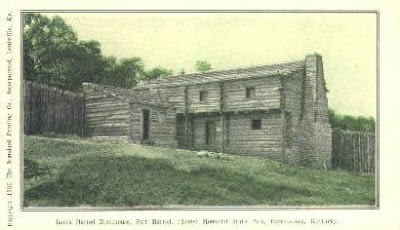 Historic postcard personal collection
It took about five months to build the fort. At its height, Fort Harrod contained about eighteen cabins. The cabins were built of notched logs which had to be "chinked", which is where mud mortar and wood chips were put into the cracks between the logs. The first floors were dirt, but later, hewn logs would be used, but they were notorious for painful splinters. Every cabin had a huge stone fireplace. The first chimneys were made of wood which proved unsatisfactory because they caught on fire. Later, they were made of stone to like the fireplace.
Without the fort, the inhabitants of Harrodstown and the surrounding country could not have existed because there was no other place of refuge accessible at the time. It was their stronghold and meeting place in time of peril. Most Kentucky pioneers, although skilled woodsman, were farmers rather than soldiers. Their primary concern was for their families and the crops upon which their survival depended. The fort was the center of all information for the development of the settlement.
at September 14, 2020