Fort Harrod was a defensive, arsenal fortification and its walls served as a stronghold ready to protect settlers living on the outside. It became an important haven to the pioneers of Kentucky because, as the American Revolution intensified, the British encouraged the Native Americans to raid the Kentucky settlements.

Harrodstown had lush grass and abundant water, and the limestone soil made it a pastureland for grass eating animals that was without parallel in pioneer history. Bears provided an excellent meat substitute for bacon.  Game was plentiful but so were Native American raids. The new fort was nearly completed and conveniently located it provided refuge for both the people of Harrodstown and other settlers when the Native Americans were on the warpath. 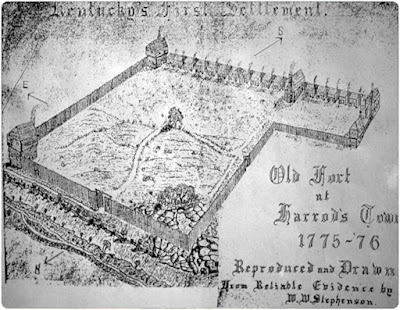 Illustration by W. W. Stephenson from Armstrong Archives
Fort Harrod was built of hand-hewn logs ten to twelve feet tall in a "parallelogram" configuration measuring 264 feet by 264 feet. Thousands of trees were cut down and the bark peeled off. The bark had to be removed because it made the fort more prone to fires set by the Native Americans. The logs of the ten-foot-high stockade were embedded in a trench and were pointed to make notches in which riflemen on the fire walk could rest gun barrels and fire without being seen from outside.
First, the base wall was built with a blockhouse on each end. On the south side of the fort, the cabins' walls formed the actual stockade wall. The chimneys were kept inside the walls so Native Americans could not stop them up. Then the three remaining walls, called stockades, and the blockhouses in each corner were built.
Blockhouses were not only military centers but leader’s dwellings.  Their ample size also sheltered families in times of danger.  At this time, the Fort Harrod community population of about two hundred included thirty-seven outlying farm families, who lived in the fort only when under Native American attack.  The farmers planted seeds they brought from the east and ate the game and wild fruit of the new frontier.
Continued next Monday ...
at September 07, 2020