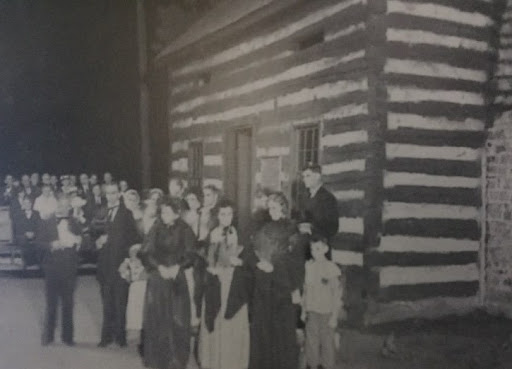 The Methodist Church first held services in Kentucky at the home of James and Ann Harrod in Boiling Springs at the Harrod's Station. The large, frame two-story home used for services was burned to the ground by arson in 1833. Technically, Boiling Springs is in Danville, Kentucky.

The above log cabin, the home of Rebecca Hart, was the site of the first Methodist prayer meetings held in Harrodsburg in the early 1800s.  In 1828, an official Methodist Society was organized, paving the way for the future establishment of the Methodist Church in Harrodsburg.  This 1935 photograph shows a pageant reenacting a gathering of early Methodists for an old-time prayer meeting at the Hart cabin.

This cabin was located on the corner of West Broadway and North College Streets.  Because of its history, the Stoll Oil Company of Louisville, which had bought the property in the early 1930s, decided to restore it, furnishing it with period pieces and opening it as a museum.  The exact date off its demolition is not known.

These very cabins were Harrodsburg’s oldest buildings, built outside the fort at a time when the threat of Indian attacks had lessened, but close enough to get back inside in the case of trouble.  The settlers, anxious to escape the confines of the stockade, wanted to establish their own paces to raise their families and plant their crops.