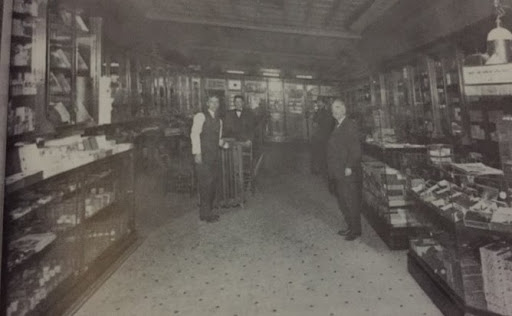 The photograph above is the inside of Dedman Drug Store.  The man on the right is C. M. Dedman and the other men are unidentified.  Glass display cases line both sides at the front of the store.  The soda fountain is near the back on the left side and the solid cherry apothecary drawers line the back wall.  The second floor of the building was used to sell paint and wallpaper, as well as aisles of books, perfume, comb and brush sets and more.  The soda fountain offered  a delicious soda, ice cream sundae, root beer floats and other mouthwatering treats.  There were only eight stools, so most people took their purchases outside, probably enjoying the shade in the courthouse square. 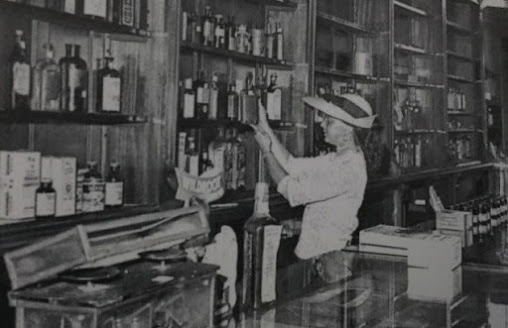 The above photograph taken in 1983 shows Harriett Ruby arranging antique bottles in the cherry cabinets of the drug store when it was her antique store.  Although Dedman Drugs changed ownership many times since opening in 1868, it remained a pharmacy until 1983.  From this time until 2001, the building served as several different antique stores. 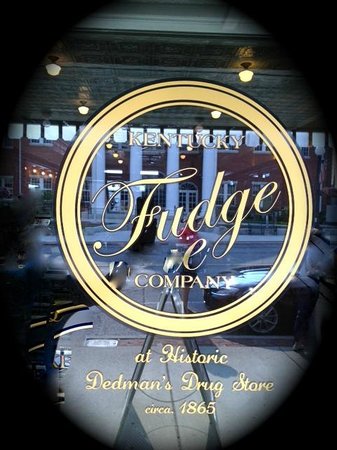 In 2001, with the help of Ralph Anderson, the James Harrod Trust was able to buy the store and restore it to its turn of the century beauty.  The photograph below shows the outside of the restored building where the Kentucky Fudge Company at Dedman Drug Store is once again a meeting place for food and conversation.