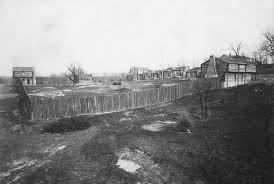 Photo from the Armstrong Archives
Fort Harrod
Part One

On March 8, 1775, James Harrod led a group of forty or more men back to Harrodstown to the first permanent white settlement west of the Alleghany Mountains. Flooding had ruined many of the structures built the previous summer and the land was soaked, so these cabins were abandoned, and the decision was made to construct a log fort on the hill west of the Big Spring. The site of the fort, to be started later in the summer, was chosen by Harrod because it had several good springs and good view of the town site and the adjoining countryside. 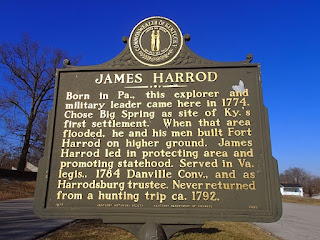 During Harrod’s years in Kentucky, his first loyalty was to the men who had chosen him as their leader. Some of his men were unwilling to obey what they considered unnecessary and arbitrary restrictions on their movements. Newcomers, seeing the muddled situation in the Transylvania colony, choose to ignore the rulings or returned to their old homes in the east rather than risk their efforts on uncertain claims.

The settlers started running short of flour and suffered from lack of greens until the vegetable patches began to mature. Richard Henderson and the Transylvania Company provided ammunition for the men, but could help little with other needed articles because of their inability to bring out the bulk of provisions they had packed in the wagons, still on the other side of the Wilderness Road pass.
Others came to the west that summer, and more and more turned to James Harrod for authority, leaving Richard Henderson in a depressed state of mind. Finally, disheartened and ignored, Henderson returned to North Carolina for consultation with his co-proprietors. 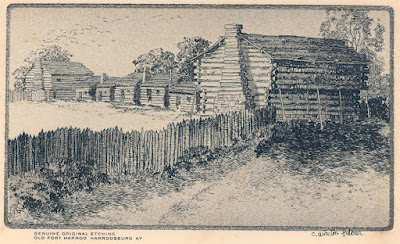 The Kentucky frontiersmen could plow the ground, fence in new clearings, and erect cabins, but only the arrival of women and children could give stability to the settlements. The women and children began arriving in September 1775. There was also resurgence in the work of completing Fort Harrod, which the increasing number of the Native American attacks rendered a necessity. The construction on the stockade began and it was completed by early spring 1776. The fort enclosed an area of about one and a half acres, with a spring and a stream running through for fresh water. Settlers were warned of Native American attacks by a large cedar horn sounded from the fort.
To be continued next Monday ...