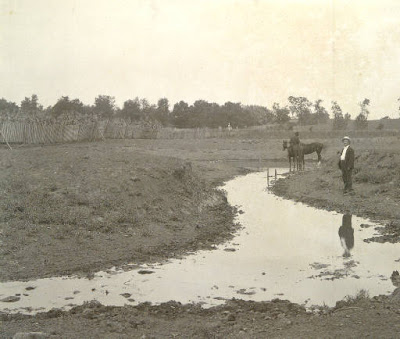 Soon more surveyors were passing through Harrod’s Town and they reported an increasing number of Native American attacks along the western borders of Virginia and Pennsylvania. The governor of Virginia, Lord Dunmore, and his agents were alleged to have incited both sides of the Native American conflict. Dunmore declared a state of war with the hostile Native American nations and then ordered up an elite volunteer militia force for the campaign. 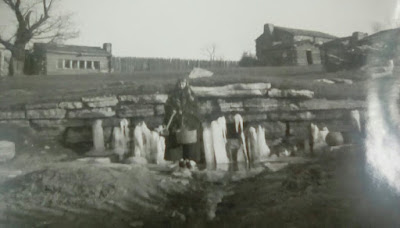 Frozen spring at Fort Harrod
Photo from the Armstrong Archives
Captain William Russell, per instructions of Colonel William Preston, sent Daniel Boone and Michael Stoner to notify Harrod and the other white men of the increasing Native American hostilities. Scouts were also sent out because of fears the Cherokee would combine with the northern Native Americans.
On July 16, 1774, James Harrod’s dream of a permanent settlement in Kentucky abruptly came to an end. Nine men from Harrod’s Town were busy at their favorite task of claiming and surveying land and were camped at Fontaine Bleau Springs, which was located only a few miles north of their new settlement. Suddenly they were attacked by twenty Shawnee warriors, who instantly killed two men. 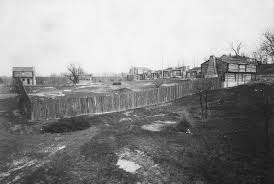 Photo from the Armstrong Archives
Several men escaped to Harrodsburg and reported the tragedy to their leader. Captain Harrod collected thirty-five men and returned to the site of the battle, but the Indians had disappeared.
Shortly after Boone and Stoner came through Harrod’s Town, on July 20, 1774, a party of men was ambushed near a Mercer County spring. Two of the men, while separated from the others, were surrounded, and killed. Two of the others escaped but headed straight back to their homes in Virginia with nothing but the clothes on their back. A fourth man reached Harrod’s Town and reported the news.
In fleeing the Indian attacks, Harrod and his men joined the campaign to defend the western border of Virginia. The conflict resulted from escalating violence between British colonists who were exploring and moving into land south of the Ohio River, and the Native Americans, who held treaty rights to hunt there. Harrod and twenty-five men from Harrod’s Town joined the Fincastle Battalion under the command of Col. Christian’s regiment and went on to the Point Pleasant campaign but arrived too late to participate in the wars only major battle. The Battle of Point Pleasant, now officially recognized as the first battle of the Revolutionary War, ended on October 10, 1774. 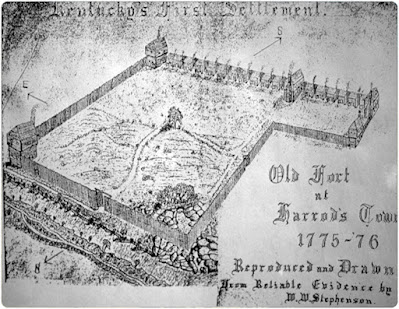 Illustration by W. W. Stephenson
After the long and furious battle, Shawnee Chief Cornstalk agreed to a treaty, ending the war. By their treaty, the Native Americans pledged not to cross south of the Ohio except for trade, and to do no harm to white men coming down the river. History shows the war was provoked more by white men than by red and became known as Lord Dunmore’s War, a name given to it in commemoration of its chief provoker.
After Dunmore’s War, the whole country was “ringing from one end to the other of the beautiful Kentucky and the banks of the pleasant Ohio”. According to historians, “Those who have been there gave the most enticing accounts of its beauty, fertility, and abundance of game. The Buffalo, Elk, and Bear were said to be rolling fat, and weary for the rifle shot.”
at August 24, 2020