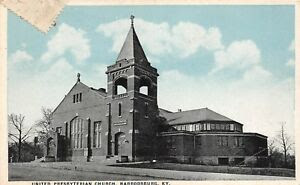 History of the United Presbyterian Church per its website:

"The United Presbyterian Church of Harrodsburg began in 1783 as the Cane Run Church in a small log cabin near a small stream called Cane Run. This was about three miles east of Harrodsburg on what is now the Burgin Road. In 1816, the church moved to Harrodsburg and changed its name to the Harrodsburg Presbyterian Church. It bought land for the present site and built a two-story frame building 40 X 30 feet with the ground floor for worship and, like true Presbyterians, used the second floor for a school. In a year, this building was too small. The minister, Dr. Thomas Cleland, claimed the Lord remedied the difficulty by sending a strong northeaster which razed it to the ground. Dr. Cleland then so exhorted his congregation that they built a large brick church 70 X 45 feet which was dedicated on November 26, 1820.

By 1853, this building was too small, so it was replaced by the brick church which still stands as the present sanctuary. The educational north wing was added in 1965. Under the flowering crab apple tree at the corner lie some of the foundation stones from the old Cane Run Church, thus preserving a tie between the oldest and the newest.

In 1847, the church built the brick Greek revival building on the south side of the church to house its Harrodsburg Female College of which the pastor was the principal. In 1883, this building was sold to private individuals. It was operated as Hogsett Academy for boys, then the Harrodsburg Academy for boys and girls until the public high school was built. The church re-purchased the property in 1961 and operates it as apartments under the name of “The Academy”. Structurally, this building remains true to its original condition.

The Civil War divided Harrodsburg and, in 1866, the Presbyterian Church. The southern sympathizers retained the old church; the northern sympathizers built a church on Poplar Street called the Assembly Church. In 1913, the breach was healed by the reunion of the two congregations to become the United Presbyterian Church. The Assembly Church was sold, and the old church renovated for use by the new congregation. The united church continued to support and participate in Presbytery, Synod, and General Assembly programs of both the Northern and Southern Presbyterian denominations, thus helping lead the way toward the 1983 reunion of the two denominations.

The church building has served many groups and purposes. In 1862, after the Battle of Perryville, the church was a hospital with the women serving as nurses day and night. Its basement and Sunday School rooms, and caring church members, provided refuge and care for victims of the 1937 flood in Louisville. Just after World War II a kindergarten was opened for the war babies, The Lad and Lassie Preschool. The preschool operated until the year 2002. Many other church and community groups have used and now use the facilities for special programs, organizational and service meetings.

In 1883, the Centennial of Presbyterianism in Kentucky was celebrated in this church with attendants from all parts of the state and beyond. In 1993, a daylong event celebrated the Sesquicentennial year of the Presbyterianism in Kentucky. The three services led by national church leaders were attended by the largest body of Presbyterians that ever assembled in Kentucky. In 1934, President Franklin Roosevelt visited Harrodsburg to dedicate the Pioneer Memorial. The crowd was estimated by the Courier Journal at 50,000 people. This church, and all others in town, opened their doors for the convenience and comfort of the visitors.

The church doors are still opened for individuals or groups for special programs and services. The pastor and members still take seriously the knowledge that we are keepers for our brothers and sisters. They still rejoice in the fellowship of all believers. The church’s own services are open to all who wish to share in the commitment to serve Jesus Christ."