Birthplace of Kentucky - The Battle of Blue Licks 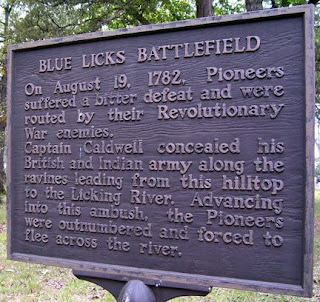 The Battle of Blue Licks
Attacks by Native Americans were beginning to increase significantly in Kentucky. On August 5, 1776 a skirmish near Fort Harrod, soon to be called the “turnip patch incident,” occurred. A party of ten or twelve Native Americans had secreted themselves near a turnip patch was on the flat north of the fort, and the alarm shown by the cattle indicated the presence and hiding place. Major George Rogers Clark with a number of men, including Hugh McGary and young James Ray, crept out of the south gate of the fort, got into the rear of the Native Americans, and killed four of them and wounded others, and took plunder which sold for upwards of 70 pounds.
Fast forward to the summer of 1782 and Native American attack were still going strong and dangerous. Spies told them an expedition might be launched by the British about the same time as McAfee Station, seven miles from Fort Harrod, received a sudden attack. Harrod was not in town at the time, but Hugh McGary was, and he heard the firing in the distance. He quickly rounded up a few men and raced from Harrodsburg to McAfee, yelling louder than the Native Americans. Hearing their noisy approach, the Native Americans fled, fearing a large counterattack.

The Indian attacks were so bad that even the young boys had no time to be idle, and several of the older ones joined a company that went to help Bryan’s Station when it was under siege. Harrod and the other leaders, fearing that Bryan’s Station would not withstand a large attack, sent out companies from all the older stations. Boone led one from Boonesborough and Logan from his station. McGary led Harrodsburg’s company because Harrod had lumbago and was confined to his house. Harrod never thought his company could lose because they had more than one hundred-fifty men. However, he was devastated to learn the Native Americans won a big victory near the lower Blue Licks. McGary reached home the night after the battle of Blue Licks and was the first to bring the news of the defeat.
There were eight Harrodsburg people killed at the Blue Licks battle on August 19, 1782 – Joseph Lindsay, James Brown, John Kennedy, Capt. Clough Overton, Stevens, and three others. It is estimated that eight or twelve were taken prisoner. The people of Harrodsburg used to consider McGary as a blustering and rather cowardly man.
Because of the confusion with the survivors, many blamed Major McGary for the defeat. Maddened by the delay, McGary swore he had come for a fight and splashed across the river, calling all who would not follow him “damn cowards.” The more experienced fighters wanted to wait for Logan’s reinforcements before facing the Native Americans, but McGary and his men rushed across the Licking River to death and disaster.
The Native Americans killed more than sixty white men but lost only six of their own. On August 24th, Colonel Logan and four hundred-seventy men arrived in time to bury the slain. Daniel Boone reported the horror to be almost unparalleled: “We … found their bodies strewed everywhere, cut and mangled in a dreadful manner … Some torn and eaten by wild beasts; those in the river eaten by fishes; all in such a putrefied condition that none could be distinguished from another.”
The effect of this loss was immediate and violent. The panic was so great that even the oldest settlers declared they were returning to their former homes. One settler is said to have offered his father the entire fourteen-hundred acres of his preemption for a horse to carry his family back to Virginia.
Except for the loss of life, one of the greatest tragedies was the aftermath of the attack. Todd and McGary received most of the blame. Todd was accused of too much anxiety to prove his military skills and McGary for his rashness in leading the charge. McGary became the most hated man in Kentucky. Harrod often said if he had been along, he could have stopped McGary before it was too late.
Clark acted immediately. He had been given added authority from the governor to prepare a large offensive expedition in Kentucky. He called a meeting of the militia officers, including Harrod, Logan and Floyd, to sit on a council to outline plans for a retaliatory attack. They feared the disaster at Blue Licks might make a military draft necessary in order to get enough recruits. The ambush had devastated one-thirteenth of Kentucky’s militia. Many settlers fled back east, leaving the west open for more attacks and causing 1782 to be remembered as the “Year of Blood.”
The Kentucky militia eventually moved the Native Americans northward, taking seven prisoners and liberating two white men, but the Native Americans were staying far away from the battle. The settlers burned crops and destroyed ten thousand bushels of the Indian’s winter corn. Blankets, kettles, and guns were also gathered to sale later at auction. Eventually the army of settlers went home, although they still wanted revenge for the loss at Blue Licks.
The British believed the Long Knives had more men than they did. Sickness was widespread and the Native Americans, with decreased support from the British, realized the hopelessness of winning against the Kentuckians. The confidence the pioneers had lost because of the massacre at Blue Lick was restored. Harrod realized the people gained many new recruits who had come to the Bluegrass as promised.
Other August fact about Harrodsburg:
·         Margaret Harrod Fauntleroy, the only child of James Harrod died August 25, 1841, at Boiling Springs at the age of nearly 56 years, leaving many worthy descendants.
·         James Harrod’s will was produced before the open Court of Mercer County on August 27, 1793 and duly recorded and proven that his “beloved wife Ann of Mercer county, District of Kentucky” received one-half of the tract of land on which she is living when his will was written in November 1791.
·         James Harrod’s seat on the Harrodsburg Board of Trustees was declared vacant August 13, 1793. Mrs. Ann Harrod’s testimony comes the closest to solving the mystery of Colonel Harrod’s death.  “Her husband was killed or died in a hunting expedition up the Kentucky River in the fall of the year 1792, and he had not been heard of since, a part of his clothing being found afterwards in the river.”