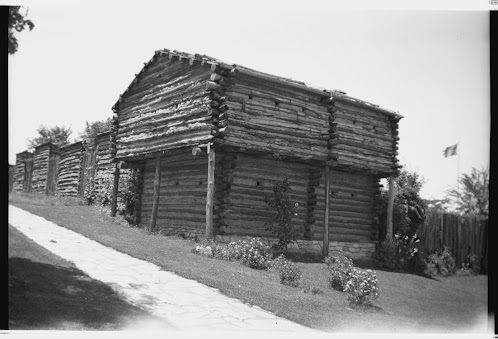 After the Battle of Point Pleasant, on March 8, 1775, James Harrod led a group of 40 or more men and returned to Harrodstown to stay at the first permanent white settlement west of the Alleghany Mountains. Flooding had ruined many of the structures built the previous summer and the land was soaked, so these cabins were abandoned, and the decision was made to construct a log fort on the hill west of the Big Spring. The site of the fort, to be started later in the summer, was chosen by Harrod because it had several good springs and good view of the town site and the adjoining countryside. 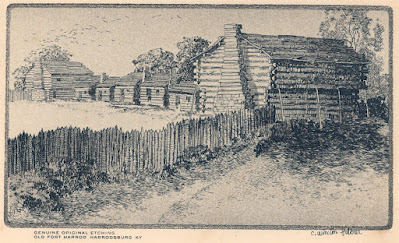 Personal historic postcard
Fort Harrod was started in late 1775 and finished in early1776 and was located about one-half mile south of the Big Spring. It was built on higher ground than the 1774 Big Spring’s encampment because the higher ground allowed an unobstructed view in all directions.  There were numerous springs at the newer site with a natural spring being located within the walls of the fort.  This spring was a primary water source for the people of the fort and always supplied them with a constant water supply.

Fort Harrod was built of hand-hewn logs ten to twelve feet tall in a "parallelogram" configuration measuring 264 feet by 264 feet. Thousands of trees were cut down and the bark peeled off. The bark had to be removed because it made the fort more prone to fires set by the Native Americans. The logs of the ten-foot-high stockade were embedded in a trench and were pointed to make notches in which riflemen on the fire walk could rest gun barrels and fire without being seen from outside. First, the base wall was built with a blockhouse on each end. On the south side of the fort, the cabins' walls formed the actual stockade wall. The chimneys were kept inside the walls so Native Americans could not stop them up. Then the three remaining walls, called stockades, and the blockhouses in each corner were built. 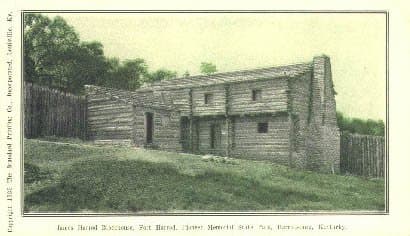 Blockhouses were not only military centers but leader’s dwellings.  Their ample size also sheltered families in times of danger.  In 1776, the Fort Harrod community population of about two hundred included thirty-seven outlying farm families, who lived in the fort only when under Indian attack.  The farmers planted seeds they brought from the east and ate the game and wild fruit of the new frontier. 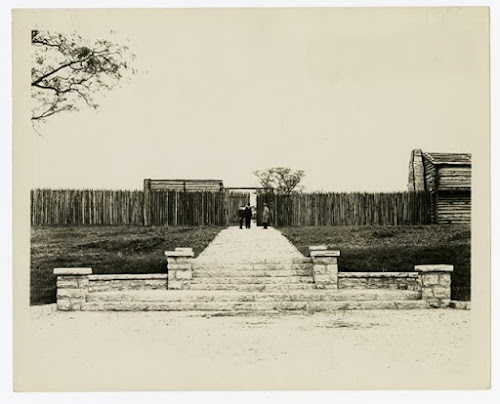 Photo by The Harrodsburg Herald 1944