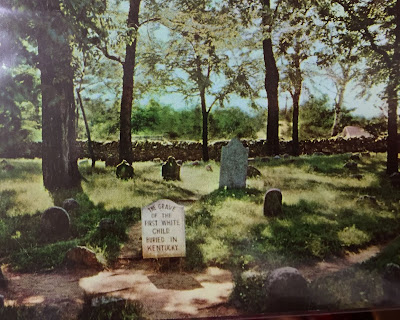 On a portion of the Schoolhouse Square in Old Fort Harrod was the first pioneer cemetery. Old Fort Hill Cemetery, later known as Pioneer Cemetery, began with the settlement of Harrodstown, and was situated under the very shadow of Fort Harrod. It was the custom in early pioneer times to have the burying ground in proximity to the fort, where it could be properly protected from the savage foe, and in some instances the burial took place within the stockade.

This “Little God’s Acre,” holds peacefully the pioneers of Fort Harrod and is Kentucky’s oldest burial ground. The cemetery is unique in that there are eight distinct periods of grave marking, from the rude stones on which the settlers had no tools with which to carve name of date to the Italian marble so long in use in a later century. The cemetery is entered by old-fashioned stone stiles built by the descendants of the five McAfee brothers and their mother, Jane McAfee, outstanding settlers of the first period. 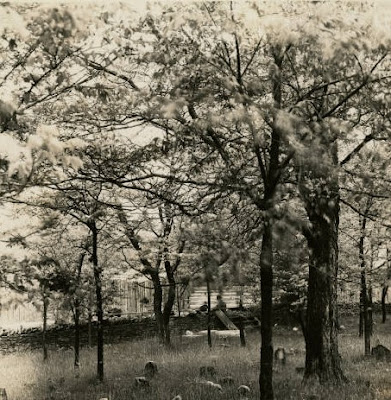 The Woman’s Club of Harrodsburg erected the great boulder of native stone in the park honoring General Clark’s memory. Clark lived in Fort Harrod and while sharing the dangers of the settlers, realized that if the little colony was to live, the Native Americans and the British allies were to be subdued and many of his most gallant comrades in the conquest of the Northwest were from Fort Harrod. His perilous undertaking began when he left that Fort to lay his plans before Patrick Henry, Governor of Virginia. 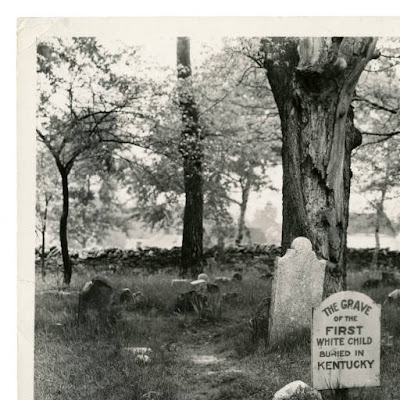 The first white child to be buried in the State is entombed in this primeval God’s Acre, and the dust of many of those courageous men and women who braved the perils of a pathless wilderness, has made sacred this historic spot.

One of the noted pioneer women of the state lies buried here. Ann McGinty lived most of her adult life at Fort Harrod and she departed this life in 1815. She brought the first spinning wheel to Kentucky, made the first linen and linsey, “linsey woolsey”, out of the lint of the nettle, and of buffalo wool. She was married three times, first to William Poague, who was killed by the Indians, then to Joseph Lindsey, one of the victims of the Blue Licks battle, and later to James McGinty. 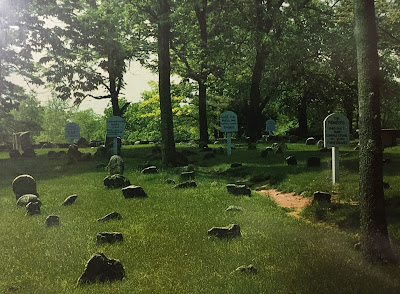 A number of victims of Native American warfare and of savage ambush are here interred, and several of those wounded in the Battle of Blue Licks, and who afterward died, are buried here, while as late as 1833, some victims of the cholera scourge found a resting place in this old cemetery.
Every foot of ground seems to have been utilized, while several graves are outside the old stone wall surrounding the enclosure. There are approximately five hundred graves are here, possible more, and for the most part, these are unmarked.

At an early date, a gate in the stone wall faced northward toward the fort, and a narrow aisle divided the cemetery into halves, but finally this space was filled with graves, and the gateway permanently closed. 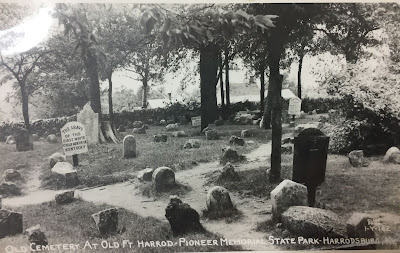 Here are eight distinct types of grave markings to be found in this interesting and historic spot of ground; first, the rude unlettered surface stones, which constitute the greater number. Second, by two layers of large flat stones placed over the grave, one layer above the other to protect the occupant from wild beats, which then abounded, or the prowling foe. Third, by rough limestone head and foot markers, rudely rounded and pointed by the first stonemason’s hammer.

Fourth, by large blocks of birdseye limestone, hewn in a peculiar coffin-shaped form, by later skilled workmen. Fifth, by slabs of flinty rock, crudely lettered, either with the initials of the deceased, or occasionally with the name, age, and death. These markers have proved the most lasting of any, some of them being still legible after one hundred and twenty-three years of exposure to the weather. Sixth, a tall sandstone slabs of later date, but badly worn. Seventh, carved sandstone sarcophagi, also showing the ravages of relentless time, and eighty, by a simple white marble slab, the first and only one in this quaint city of the dead.

These markings clearly define the progress of civilization at the date of burial, and the materials to be had at the time. 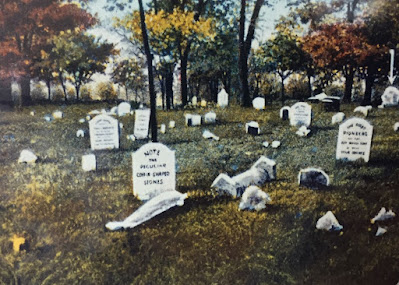