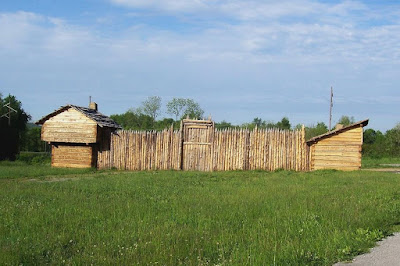 Photo from the blog, Little Bits of History Along U.S. Roadways

Logan’s Station was established in 1775 by its namesake, Benjamin Logan, and John Floyd, after the men had explored and surveyed the area the year before. The location was selected largely due to its proximity to Buffalo Spring, which provided a water source for the settlement.

The Kentucky section of Boone Trace – a trail cut into Kentucky by Daniel Boone (Wilderness Road) – originally ran north from Cumberland Gap to Boonesborough. However, a divergent section, called Skagg’s Trace, was made that ran from Hazel Patch (present day Laurel County) northwest to Crab Orchard in Lincoln County. Later, this road was extended to Harrodsburg and then eventually to Louisville on the Ohio River. Logan’s Station was established on the Skagg’s Trace branch of what eventually became the Wilderness Road near present-day Stanford.

Logan’s Station provided a refuge for families making their way west to lands in Kentucky County, Virginia. The fortification was described as a stockade, measuring 150 by 90 feet, with family cabins spaced along the walls. Due to potential attacks by Native Americans, Logan’s Station was a popular location for bother permanent and transient frontier families. 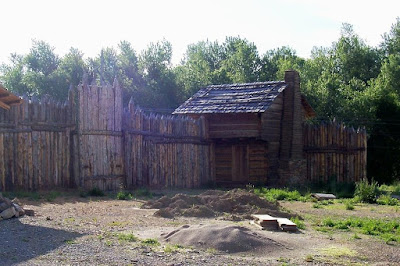 Photo from the blog, Little Bits of History Along U.S. Roadways

In May 1777, Logan’s Station was the scene of a thirteen-day siege by Native Americans. During the stalemate, one of the fort’s occupants, Burr Harrison, was wounded outside the stockade. Benjamin Logan risked his life by rescuing the wounded man while protecting himself from deadly arrows with a feather mattress.

As Native American threats lessened throughout the 1790s, Logan’s Station, like other frontier forts, lost their importance. Settlers once seeking protection within stockade walls and strength in numbers established independent family farms on their own lands.

Nicknamed Standing Fort by Indians after they were unsuccessful in capturing or destroying it in May 1777. Over 100 people sought refuge here in 1780. Over time the name was simplified to "Stanford," giving the town its name. Also called Fort St. Asaph after the original name of the settlement, first settled in 1775. No original remains of the fort are known to exist.

At the foot of the hill, on St. Asaph's Branch, just below the fort, the settlers maintained a gristmill. In all probability, this was the first mill built in Kentucky. During his first visit to the fort in late April of 1778, Daniel Trabue spoke of eating bread - something that could not be obtained at Fort Boonesborough. 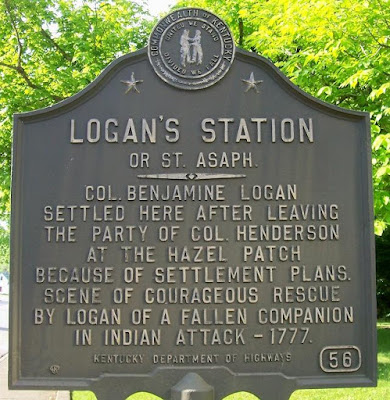