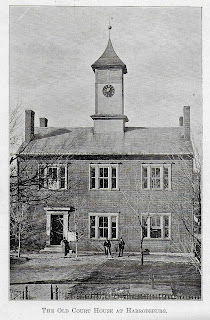 1787, the land for the courthouse square was purchased by justices of Mercer County.
1789 first courthouse was originally built, made of stone, rude and humble - attached to the jail and the clerk's office. It also served as a town hall, church, and a meeting place for Revolutionary War veterans.

1818, the original courthouse was remodeled and became a respectable brick building with a slate roof, a town clock, and having every convenience for the furtherance of business. It also held the town's first library. A bandstand was added and the area became known as Courthouse Square. Family picnics and concerts were held in the square. A mass killing occurred at the courthouse on November 26, 1873, when three men died in what became known as the Thompson-Daviess tragedy. 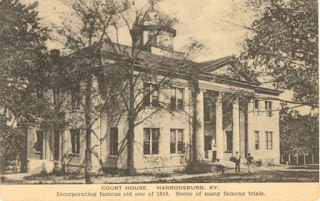 This courthouse was condemned in 1910 and a new building planned. The Bandstand was also torn down and never replaced. 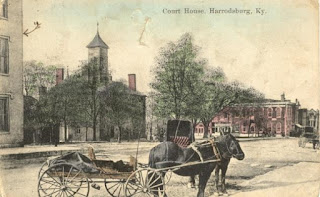 In 1912, as progress on the new courthouse was under way, builders incorporated parts of the old courthouse walls into the new building. Col. George Chinn described the new courthouse as "a pure Southern Colonial building." It cost almost $25,000 and was equipped with fireproof vaults and a fireproof room to house the Harrodsburg Historical Society's valuable collections. In 1928 an electrical fire in the clock tower caused major damaged and large sections of the courthouse needed remodeling. According to information about the cornerstone, materials from all three previous courthouses were incorporated in reconstructing the newest courthouse.

In 1980 it was listed on the National Registry of Historic Places, but that was not enough to keep it from demolition in 2009. The Kentucky Administrative Office of the Courts deemed the building "unsafe and unsound". Although still called Courthouse Square or "Woods on the Hill", no green space was incorporated into the new courthouse plans.

The Old Courthouse was razed to the ground to make room for a brand-new judiciary center.
(This photo by Jerry L. Sampson) 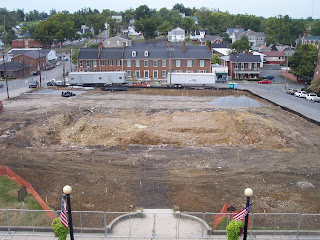 In 2011, the new Mercer County Judicial Center was dedicated.