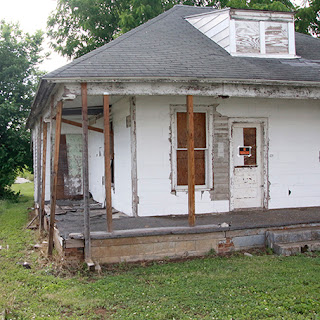 The Harrodsburg Herald/Jennifer Marsh
Properties like the one seen above are being broken into and used as shelter for the homeless.

Government officials and members of the public met last week to discuss one of the most vexing problems facing Harrodsburg and the nation: the swelling numbers of homeless people. Over half a million Americans are homeless, according to endhomelessness.org, with 4,079 people in Kentucky being homeless.

But it’s a difficult issue to quantify. In the study, “Homelessness, Health, and Human Needs,” the authors write of the problems facing researchers. “Counting the homeless population is extremely difficult because of the lack of a clear definition of homelessness, the mobility of the population, and the cyclical nature of homelessness for many individuals. In addition, homeless people are often reluctant to be interviewed, and many of them remain invisible even to the most diligent of researchers,” the authors write. “There is no uniform method for counting the homeless, and very few good studies have been done.”

Among the issues that lead to homelessness include a lack of affordable housing, unemployment and mental health and substance abuse issues. In the end, many people do not have access to the resources that help the rest of us get through difficult times. A 1995 study commissioned by the National Alliance to End Homelessness found that up to 50-percent of foster youth were homeless within 18 months of aging out of the system.

For Cameron Jones and Phillip Van Dyke, who attended last week’s meeting, the root is a lack of opportunities. “People my age have a hard time making more than $30,000 a year,” said Jones, who noted that many of the abandoned houses that plague Harrodsburg have been abandoned for years.
Van Dyke said there are a lot of homes that could be used for affordable housing.

While transforming a currently empty house into a home for someone who needs one is tempting, it’s not easy. Mayor Art Freeman noted it only took 24 hours to tear down one house on East Office Street, but it took years for the case to work its way through the court system. Freeman said some people buy houses for less than nothing but never do anything to improve it. “The property deteriorates and deteriorates and deteriorates until they’re unlivable,” he said.

The city has had some success in placing liens against properties for city ordinance violations, but it still takes time. Erich Ruehs, the code enforcement officer with the Harrodsburg Police Department, said he sees another side of homelessness: people with a long rap sheet due to drugs “with no intention of helping themselves.”

Ruehs said he finds them living in tents in people’s backyards, ranging in age from their 20s to their 50s. He described them as being like zombies. “You chase them out of one house and they go into another,” Ruehs said.

Mayor Freeman noted the city had opened Lions Park Community Center as a homeless shelter three or four times and not a single person showed up. “How do you do something to help somebody’s situation when they don’t want any help?” he asked.

Officials believe many of the homeless are being brought here from Lexington. Some blame local feeding programs for attracting the homeless here. It’s been an open secret that many cities have resorted to bussing the homeless elsewhere. According to the New York Post, the City of New York has shipped homeless people to nearly 400 different cities across the nation, usually without informing the other cities first.

Officials with the City of Lexington deny shipping the homeless here. However, Harrodsburg is within an hour’s drive of several homeless shelters. “Dealing with Harrodsburg’s homeless problem is big enough. Bringing in all from outside is overwhelming,” said Troy Roberts of theBluegrass Community ActionProgram.

Roberts said trying to get people into affordable housing takes huge amounts of time and resources. “Moving them to another community is never the answer,” he said. He said funding is being increasingly used for prevention and rapid rehousing instead of constructing shelters, which he likened to the baseball field in Field of Dreams. “If you build it, they will come,” Roberts said. He said the key is if the person is willing to be helped.

Retired City Commissioner Jack Coleman said he and other officials are inundated with complaints about the homeless using facilities downtown, panhandling, camping out at local parks and drug use. The complaints come from the public, from city employees and business owners. “Our kids can’t use the park,” Coleman said. “The things we’ve built for the community we can’t build anymore.”

Everyone agreed that homelessness is a complex issue and that one meeting is not going to solve the problem. They also agreed on one other thing; the vast change that has occurred in Harrodsburg over the last few decades. “It’s not the same Harrodsburg,” Phillip Van Dyke said.
at July 03, 2020