Photo from the Burn Pit

James Harrod and his men left Harrodstown in late 1774 to join the campaign to defend the western border of Virginia against the Native American uprising and British incursions. The conflict resulted from escalating violence between British colonists, who in accordance with previous treaties – Treaty of Hard Labor (1768) and Treaty of Fort Stanwix (1768) - were exploring and moving into land south of the Ohio River, modern West Virginia and Kentucky, and the Native Americans, who held treaty rights to hunt there.

Harrod and twenty-five men from Harrodstown joined the Fincastle Battalion under the command of Col. Christian’s regiment and went on to the Point Pleasant campaign, or Dunmore’s War, but arrived too late to participate in the wars only major battle. The Battle of Point Pleasant, now officially recognized as the first battle of the Revolutionary War, ended on October 10, 1774. 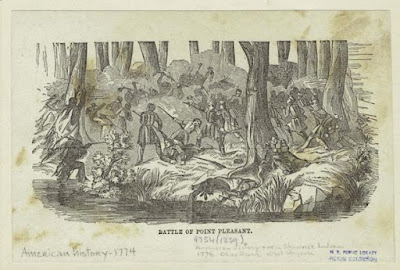 Photo from the Burn Pit

The Virginia militia sustained losses of 75 killed, and 140 wounded – about one-fifth of the entire number of the troops. The loss of the enemy could not be accurately ascertained. On the morning after the battle, Virginia militiamen marched over the battleground and found 21 of the Indians lying dead. Further inspection of the field yielded 12 more, where they had been concealed under some old logs and brush. It is almost certain that the Indian losses were greater, as they usually carried most of their dead from the field of battle. There were also reports that many of the dead were thrown into the Ohio River.