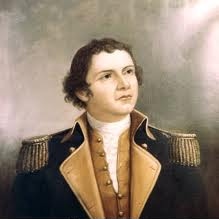 Mercer County, Kentucky, with its county-seat of Harrodsburg, is named after Col. Hugh Mercer. Col. Mercer (January 17, 1726 - January 12, 1777) was a physician, a brigadier general in the Continental Army and a close friend to George Washington. Mercer died because of his wounds received at the Battle of Princeton and became a fallen hero and rallying symbol of the American Revolution.

He was assistant surgeon in the army of Bonnie Prince Charlie in 1745 and was present at the Battle of Culloden when Charles' Army was crushed on April 16, 1746, and any survivors were hunted down and killed. As a fugitive in his own homeland in 1747, Mercer fled Scotland after months in hiding. He bought his way onto a ship and moved to America, settling near what is now Mercersburg, Pennsylvania, and practiced medicine for eight years.
In 1755, when General Edward Braddock's army was cut down by the French and Indians, Mercer was shocked by the same butchery he remembered at Culloden. He came to the aid of the wounded and eventually took up arms in support of the army that a few years back was hunting him, this time as a soldier, not a surgeon.

By 1756 he was commissioned a captain in a Pennsylvania regiment under Lt. Col. John Armstrong. During the raid of the Native American village of Kittanning in September 1756, Mercer was gravely wounded and separated from his unit. He trekked 100 miles through the woods for fourteen days, injured and with no supplies, until he found his way back to Fort Shirley. He rose quickly to the rank of colonel and commanded garrisons. It was during these trying times that Mercer developed a life-long and warm friendship with another colonel, George Washington. Mercer moved to Fredericksburg, Virginia in 1760 to begin his medical practice anew at the conclusion of the war.

Soon after this, Mercer opened a physician's apothecary and practice. Hugh Mercer's apothecary in Fredericksburg, Virginia is now a museum. George Washington's mother, Mary Washington, became one of Mercer's patients, and Mercer prospered as a respected doctor in the area. Mercer married Isabella Gordon and fathered five children: Ann Mercer Patton, John Mercer, William Mercer, George Weedon Mercer, and Hugh Tennant Mercer. In 1774, George Washington sold Ferry Farm, his childhood home, to Mercer, who wanted to make this prize the land that he and his family would settle for the remainder of his days.

His last will and testament were probated in Jefferson County, Kentucky. He left his plantation to his wife, Isabella. He stated in the will that this was the plantation adjoining James Hunter which he purchased from General George Washington.

** There are rumors that Mercer exclusively originated Washington's daring plan to cross the Delaware River and surprise the Hessians at the Battle of Trenton on December 26, 1776, and he was certainly a major contributor to its execution. Because of the win at Trenton, Washington's men agreed to a ten-day extension to their enlistment. When Washington decided to face off with Cornwallis during the Second Battle of Trenton on January 2, 1777, Mercer was given a major role in the defense of the city. 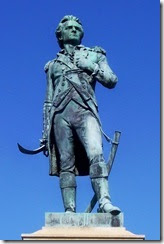