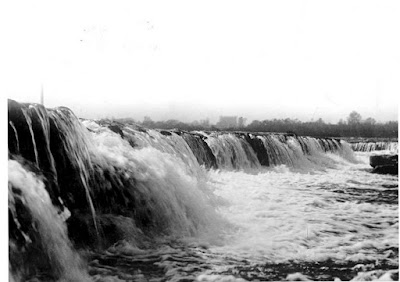 In spring 1773, James Harrod joined up with Captain Thomas Bullitt to survey land at the Falls of the Ohio, near present day Louisville. Simon Kenton was also a member of this surveying party. They spent several weeks in Pittsburgh at Fort Pitt burning and hollowing out logs to make pirogues, or canoes, and lay in supplies. Because there were no forts after they passed the upper Ohio River, Harrod’s group had to make sure they had plenty of axes, butcher knives, blankets, extra moccasins and hunting shirts, in addition to bullets, gunpowder, and fishing tackle. They also needed surveyor’s equipment, including a rod, chain, and compass.

By late summer 1773, after surveying at the Falls, Harrod continued down the Kentucky River to scout for his own settlement on what he thought was the best land in Kentucky. The Native Americans called the Kentucky bluegrass region the “Great Meadow” because of the tall grass and thick canes. Unbeknownst to each other, Harrod and the McAfee brothers – Robert, George, and James - had chosen almost identical locations for their settlements, although the McAfees were not ready to start a permanent settlement until 1775. Before returning home, James Harrod and John Smith marked and improved land at White Oak Springs in what is now Burgin in Mercer County, Kentucky.
at July 09, 2020