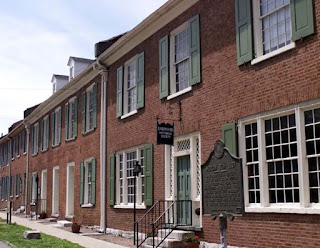 The first tavern in Kentucky was Harrodsburg’s Old Wingfield Tavern, which was followed by numerous other saloons. Legends as to why Harrodsburg’s current Main Street is on such a steep hill instead of the flat street Morgan Row occupies include the most believable one that says a discontented bartender from Morgan Row set up a grogshop (a saloon that sold cheaper liquor) at the foot of the big hill (now Main Street). The cheaper grade of whiskey soon attracted many waggoneers and draymen to refresh themselves and their horses before going up the long hill. To cater to this growing business, several stores were quickly built around the saloon. Refusing to sacrifice the quality of the liquor at its taverns, Morgan Row forfeited the title Main Street. The road used by the men wanting cheap whiskey became known as Main Street.
According to Blue-Grass Blade (Lexington, KY, January 3, 1891) - Harrodsburg had nine licensed saloons, two beer saloons, and one wholesale whisky store, from which $4,850 license is received each year. Yet with all this our jail is without prisoners, other than three trusties serving a short sentence.
at June 02, 2020