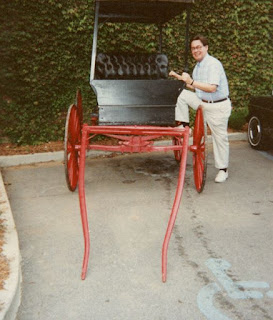 (This was posted on the Harrodsburg Sestercentennial Facebook page by my good friend, Harrodsburg historian Jerry L. Sampson)
Was playing with a new scanner today and was making some test scans and scanned this photo. This is a photo of Jack Bailey. This buggy with a fringe on top, was some wild purchase, that Mary Chelf Jones had made. I don't know why or what happened to it, but it sat in the parking lot, just down from the Blue Ribbon Deli for several days. I took this picture as Mary had just forbade everyone in the deli from touching "her" buggy.
I just got to thinking that Jack would have been so thrilled over all this talk of history and the birthday coming up. Jack was so well known for his great books, Murder, Mystery.... and the I recall series. There will never be another Harrodsburg character like Jack. A great storyteller who studied, researched and remembered all the stories of the Burg. Not just the well known stories, real people stories. Jack didn't mince words, he called a spade a spade. What a dry, acidic sense of humor. I miss him very much.
at June 06, 2020