Harrodsburg: The Birthplace of Kentucky 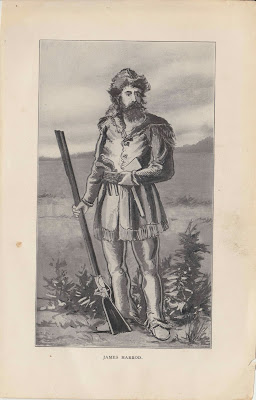 The first American legislative assembly west of the Appalachians
Here are some interesting facts and happenings during the month of May in pioneer times of Harrodsburg:

On May 7, 1775, James Harrod and Thomas Slaughter went to Boonesborough to ask Richard Henderson to settle a land dispute. While Harrod and Slaughter argued, Colonel Henderson saw himself as an uneasy mediator. Henderson secretly favored Slaughter, who was in favor of Henderson’s Transylvania Company, but feared Harrod’s wrath, refrained from voicing this conviction and tried to appear impartial. Henderson proposed the different settlements in Kentucky should send delegates to Boonesborough on May 23, 1775 and form a representative government to make laws and rules to prevent trouble. The four distinct settlements – Boonesborough, Harrodstown, Boiling Spring Station, and Logan’s Station (formerly St. Asaph) – agreed to meet at Boonesborough to draw up a constitution and make laws.

When the Transylvania Assembly held their meeting, it was the first American legislative assembly west of the Appalachians. They had nowhere to house the delegates, so they found the shade of a “giant divine elm” between Boone’s stockade and the unfinished Boonesborough fort as a suitable meeting place. This majestic tree stood on a beautiful plain, covered and perfumed by a turf of fine white clover which made a thick carpet of green up to the trunk. It is said that between the hours of ten and two, the shade of the elm would comfortably cover a hundred people. It was a good enough place, Henderson expressed privately, for “a set of scoundrels, who scarcely believe in God or fear a devil”.
As the host settlement, Boonesborough was allowed six delegates; Harrodstown, Boiling Springs, and Logan’s Station were allowed four delegates each. Henderson explained the rights of the Assembly, its policies for the colony, and the procedures that were to be followed. The Assembly would remain in jurisdiction of the territory and land would be sold at company prices. The eighteen elected delegates would make up the lower house of a legislature, but the owners would constitute the upper house. Henderson would provide executive leadership, and the Assembly would collect feudal-type land taxes of two shillings per hundred acres. English common law dealing with land ownership was based on the feudal system in which the monarch owned all the land but allowed favored individuals the use of it, as tenants.
Reverend John Lythe, a Harrodstown settler and Anglican minister, opened the meeting with a prayer. Henderson then addressed the group, calling attention to the fact they were assembled for a worthy purpose.


“You are called and assembled at this time for a noble and honorable purpose – a  purpose, however ridiculous or idle it may appear at first view to superficial  minds, yet it is of the most solid consequence … If any doubts remain among you with respect to the force or efficacy of whatever laws you now, or hereafter make, be pleased to consider that all power is originally in the people; therefore make it their interest by impartial and beneficial laws, and you may be sure of their inclination to see them enforced … As it is indispensably necessary that laws should be composed for the regulation of our conduct, as we have the right to make such laws without giving offense to Great Britain, or any of the American colonies.”
Henderson proceeded to discuss the problem facing the new assembly. Referring to English law instead of Virginia or North Carolina law, Henderson skirted the touchy subject of prior land claims.

A three-man committee was formed, including Harrod, and they drew up a statement to acknowledge the wisdom of Henderson’s reasoning and expressed an earnest desire to meet their legislative tasks. The first order of business was to draft a constitution for the new colony. Henderson wanted the constitution to have an elected assembly, with perpetual rents, and a power of veto reserved for the landowners.
The convention remained in session until the May 27, and during that time passed nine laws. These laws concerned themselves with a variety of topics: establishing courts, regulating the militia, punishing criminals, preventing profanity and Sabbath breaking, writs of attachment, clerk’s and sheriff’s fees, preserving the range, improving the breed of horses, and preserving the game. This last law was made necessary by the fact that the abundant game of the region was already fast disappearing, owing to reckless hunting by settlers. The law for improving their horses shows that even at this date the Kentucky people were interested in the subject that later enjoyed their exclusive attention.
The delegates agreed it was highly necessary to provide for courts, a militia, the collection of debts, and the punishment of criminals. Harrod served on several committees, including the one on lands in which he was chairman. He drew up regulations for the militia, helped amend the bill prohibiting profane swearing and Sabbath breaking, and served on a committee with Daniel Boone for conserving game. One of his major triumphs was the law providing for freedom of worship. This passed although at the time, the Church of England was a state institution in Virginia. The religious provision must be accredited to the temper of the frontier delegates themselves, many of whom, like Harrod, were dissenters, Scotch-Irish Presbyterians, or indifferent churchgoers.
At intervals throughout their lawmaking the legislators concerned themselves with other things. A committee was appointed to confer with Henderson concerning a suitable name for the colony. Henderson suggested “Transylvania” and the name was adopted.
Another committee, consisting of Boone and Harrod, was appointed to urge the company to grant no land to newcomers except on the conditions of higher prices than the original settlers paid. Harrod’s presence on this committee was significant, because he would later change his attitude entirely. Before the convention adjourned, Henderson, inviting open investigation, appeared before them and displayed the deed the Native Americans had given him at Watauga.

On the last day of the session he entered into a written agreement with the people. By the provisions of this contract, delegates were to be elected and meet annually, judges were to be appointed by the proprietors but answerable to the people, all civil and military officers were to be appointed by the proprietors, there should be a surveyor-general who should not be a partner in the purchase, and the legislative authority thereafter should consist of the delegates, a council of twelve men and the landowners.

The assembly agreed to meet again in September 1775 and the delegates adjourned. The settlers returned to their surveying, clearing, and planting. In Harrodstown they erected more cabins around the Town Creek, chinked the older buildings, and worked on construction of Fort Harrod. By the end of summer, Harrodstown boasted a seventy-acre cornfield and eight to ten cabins.
at May 27, 2020