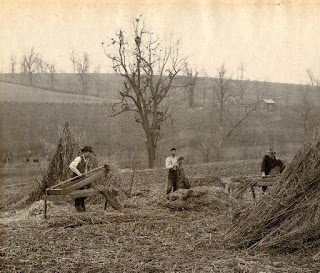 This is an interesting photo of several men harvesting hemp in Mercer County. The first hemp crop in Kentucky was planted near Danville in 1775. Henry Clay was known as the "hemp pioneer"- he actually grew it at Ashland. By 1902, Kentucky was responsible for three quarters of U.S. hemp fiber production. Production reached a peak in 1917 at 18,000 acres, mostly grown in the Bluegrass region, then waned due to market forces after World War I as other sources of fiber were introduced. A Federal program to reintroduce hemp for wartime needs in Kentucky and other states during World War II reached 52,000 acres in Kentucky in 1943. Federal policies, tightened by the Controlled Substances Act of 1970, virtually banned the production of industrial hemp during the War on Drugs. So, this photo has to be before 1970 (obviously) and before the use of "mechanical equipment" for harvesting. I have no other information on this photo, so I would appreciate any and all help - location of photo, people in photo, or time (date) of photo. Thanks!
at April 02, 2020