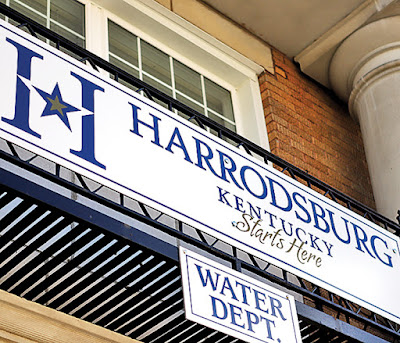 Robert Moore
Herald Staff
rmoore@harrodsburgherald.com
Last week, Boyle County announced they were forming a committee to look for ways to improve and preserve Constitution Square in Danville.
Normally this would not be news here in Mercer County, but some residents are taking exception both to the name of the committee and to who was appointed to serve on it.
According to the Danville-Advocate Messenger, the group is being called the “Birthplace of Kentucky” Committee and one of the seven members is Julie Wagner, executive director of the Harrodsburg First Main Street Program.
Jerry Sampson, president of the James Harrod Trust and the owner of J. Sampson Antiques, Books and Appraisals, said the name of the Danville board is incorrect.
“The fact is, Danville isn’t the birthplace of Kentucky, Harrodsburg is,” Sampson said Monday. “Judge Hunt needs to change the name of his organization.”
“That’s the name I thought was appropriate,” said Boyle County Judge-executive Howard Hunt, who named the committee and appointed the board members. Hunt said he was not trying to create a controversy.
“I’m looking at it from a constitutional standpoint,” he said.
Harrodsburg was founded by James Harrod on June 16, 1774. Danville, which was officially established by the Virginia legislature on December 4, 1787, was host to 10 constitutional conventions held between 1784 and 1792. The state constitution was finally adopted in 1792.
“I’m not trying to take away anybody”s thunder,” Hunt said. Harrodsburg and Danville both have their places in history, he said.
“I don’t want to upset anybody,” he said. “It”s not that big a deal to me.”
However it is a big deal to many here in Mercer County, especially with Harrodsburg’s 250th anniversary coming up in 2024. The city recently adopted a new logo with the slogan “Kentucky starts here,” and residents don’t want the anniversary overshadowed. Especially by Danville.
Bobbi Dawn Rightmyer  objects to the title of the “Birthplace of Kentucky” committee and she also believes that Wagner serving on the committee is a conflict of interest.
“With the 250th anniversary fast approaching, false information doesn’t need to be out there,” Rightmyer said. “Danville is not the birthplace, Harrodsburg is.”
Rightmyer said she is currently working on four  books about the history of Harrodsburg and Mercer County.
“I want the correct information out there so when the tourists come for the celebration, they’ll have it,” she said.
“I’m not necessarily upset Julie is part of the group—she can do what she wants,” Rightmyer continued. “However, I do think it is a conflict of interest for Julie to be the executive director of Harrodsburg First and be on a Danville Committee promoting Danville as the birthplace of Kentucky.”
Reached at the Harrodsburg First office on Monday, Wagner said she had no idea what the committee was going to be named until Hunt announced it. She said the members of the “Birthplace of Kentucky” Committee haven’t even held their first meeting yet.
Wagner, who lives in Danville, has been the executive director at Harrodsburg First for eight years. Before that, she served as director of the Heart of Danville program. She also currently serves as a member of the Danville Architectural Heritage Board.
“I don’t see how serving on a committee on my own free time is a conflict of interest,” Wagner said.
Along with Karen P. Hackett, executive director of the Harrodsburg-Mercer County Tourist Commission, Wagner worked in the initial stages of planning Harrodsburg’s 250th anniversary celebration. However, that is now being overseen by Harrodsburg 250th Inc., a nonprofit group.
“I understand why they object to the name,” Wagner said of Danville’s “Birthplace of Kentucky” Committee. “But they’re blaming me for something I didn’t have any input into.”
The rivalry between Harrodsburg and Danville is older than the Commonwealth of Kentucky. Residents of both cities are proud of their heritage. But some have taken that rivalry too far. Wagner said the reaction has been so vitriolic that she has had to block people on Facebook.
It might be better to direct that passion toward making the 250th celebration the best it can be. Leslie Bosse, one of the four original board members of the Harrodsburg 250th Inc. board, said they are currently expanding membership to insure community-wide input and oversight.
at March 05, 2020